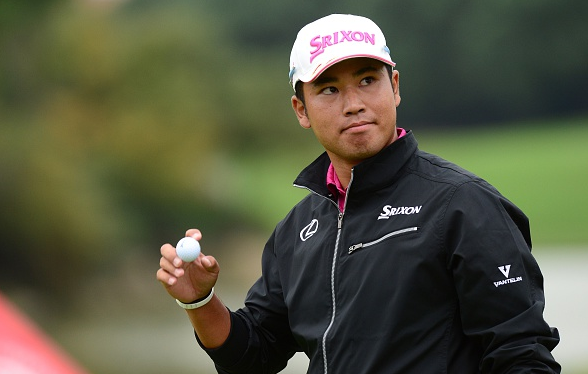 Hideki Matsuyama, indisputably Japan’s best golfer, got into pole position for the weekend at the WGC-HSBC Champions with a barrage of birdies, carding 19 through two rounds.

He kept his three-shot lead over the small, but elite, field by playing steady, mistake-free golf. With four birdies and no bogeys, Matsuyama leads by three strokes over defending champion Russell Knox at Shenshan Golf Club in Shanghai, China. If he holds for just 18 more holes, the red-hot young Japanese phenom will have his first WGC victory.

Matusyama has been on a tear as of late, winning 40 million yen for first place at the Japan Open (Japan Tour Event), and finishing in a tie for second at last week’s CIMB Classic in Malaysia (PGA Tour Event).

He got into the lead position halfway through the WGC-HSBC with a lot of birdies, despite a decent amount of bogeys. In round 3, his card was blemish free, combining four birdies with zero bogeys. Hitting 9/14 fairways, Matsuyama drove the ball better than he did in round 1 and 2, but surprisingly, hit fewer greens, going 12 of 18. He birdied three of the four par-5s.

It feels like everyone is miles behind Matsuyama, although a few players did give themselves a prayer going into the final round. Shane Lowry, the former WGC winner at the 2014-15 Bridgestone had been mostly MIA on the PGA Tour since blowing a four-stroke lead after three rounds of the U.S. Open.

He finally showed some life on Saturday in China, shooting the second best round of the field: a seven-under 65. He will need an even better round to be noticed by Matsuyama, however.

Thomas Pieters, the young Belgian who was unquestionably the European MVP at the Ryder Cup also went low on Saturday, a six-under 66, which included four birdies over the last eight holes. He is at -9 for the tournament, in a share of eighth place.

The low round of the day went to Adam Scott, who carded a surprising eight-under 64 just one day after struggling to a round 2 80. He posted bogey or worse on eight holes on Friday, but was bogey-free on Saturday, a stunning turnaround.

Arguably the hottest player in the world going into the HSBC Champions was England’s Paul Casey, the man with four consecutive tournaments finishing fourth or better (three of those in FedEx playoff events) before his T21 at last week’s CIMB Classic.

He finally showed signs of cooling off in round 3, shooting a birdie-free front nine on his way to an even-par 72, well above the field average.

Rory McIlroy, who recently won the Tour Championship and the FedEx Cup’s $10 million first place prize, showed his first signs of recent mortality, riding a poor back-nine to a two-under 70.

Not a terrible score, but worse than what the contenders have been putting up. Even still, McIlroy hit 13/18 greens, and has been one of the best in the field with GIR so far.

Brutal Week for a Major Champion

The most recent major champion was American Jimmy Walker, who went wire to wire at the PGA Championship this past summer. Walker, who was also on the U.S. Ryder Cup team, is having a disastrous week as his five-over 77 was his third straight round in the high 70s.

“I have a three-stroke lead, but I can’t think about that. There are so many good players behind; I just have to worry about my own game and play one shot at a time.”
–Hideki Matsuyama, third round leader