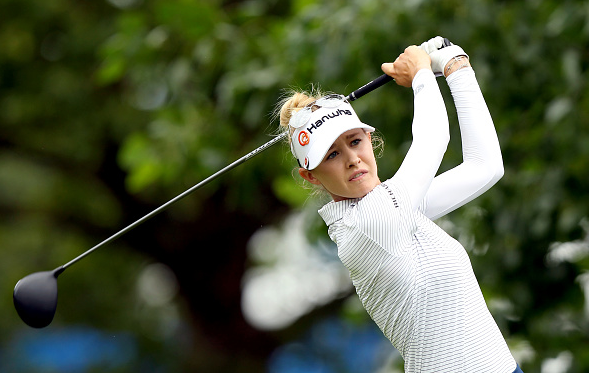 It could be back to back wins for LPGA Tour rookies. Less than a week after South Korean rookie Sung Hyun Park captured the U.S. Women’s Open, another rookie, Nelly Korda, will take a two-shot lead into Sunday’s final round at the Marathon Classic.

The 18-year-old Korda posted a third-round 5-under 66 at Highland Meadows Golf Club and sits at 15-under through 54 holes, two ahead of In-Kyung Kim (68).

Starting the day tied for second, Korda went low fast, getting to 4-under through her first seven. A bogey on the par-4 9th cooled her off a bit, but then the 18-year-old closed with two birdies to finish with a 66.

“When you end on a birdie, you’re just really excited to play the next day and get it doing, so I’m definitely excited,” said Korda, who is the younger sister of LPGA Tour player Jessica Korda. “My mentality hasn’t changed. It’s the same as the first two days. I just try to take it shot by shot really.”

“The putts just didn’t fall for me today, but my game feels great. Got it back to under par, which was huge, after being 1 over at the turn. Just looking forward to tomorrow, having some fun, and making some birdies,” said Piller.

Defending champion Lydia Ko posted her best round of the tournament, a 6-under 65, to move into a tie for 19th.

Leader @NellyKorda going to use experience from @ROAD2LPGA to calm her nerves and remain confident in the final round tomorrow @MarathonLPGA pic.twitter.com/kRItOV0s3x

“I’ve learned a lot my rookie year out here. It’s definitely to stay patient and really to take it shot by shot. I’ve been in a couple positions where I’ve been on top of the leaderboard, and I just really got ahead of myself, started thinking too far ahead.”
–Nelly Korda, 54-hole leader, Marathon Classic