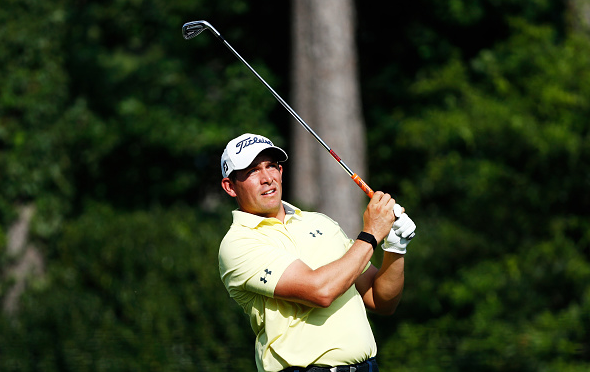 Scott Stallings fired an 11-under par 60 at a rain-softened Grand National, and leads the Barbasol Championship after 54 holes.

A day after Chad Collins scorched the Robert Trent Jones layout with a course-record 60, Stallings matched it, highlighted by birdies on the final three holes to finish at 19-under.

The record-tying round, the lowest of Stallings’ career, included an eagle, 10 birdies and a bogey.

“It was a great day. Got off to a great start,” said Stallings, who birdied three of the first four holes. “I was able to stay aggressive, and I truly had no idea how many under I was.”

One back, at 18-under, is Grayson Murray, who posted a second consecutive 64.

Jim Furyk, the tournament headliner, posted a second straight 68 and is at 8-under.

Stallings with the birdie putt on 18 to get to 60 and the lead.

The side door is open.

“To see the golf that I know I’m capable of come out is what’s most encouraging. It was nice to kind of see it all come together.”
-Scott Stallings, commenting on recent play, which includes a T3 at last week’s John Deere Classic.