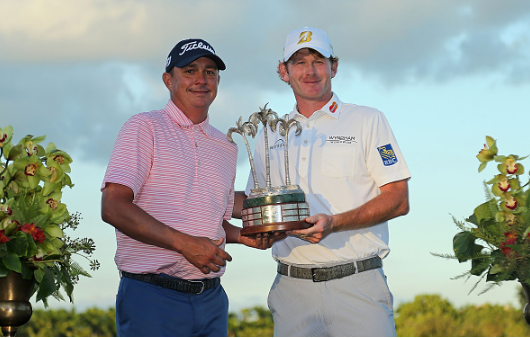 For the 16th consecutive year, the Franklin Templeton Shootout will be played at Tiburón Golf Club at the Ritz-Carlton Golf Resort, Naples and 24 individuals will compete as 12 two-person teams.

The event is celebrating its 28th year on the PGA TOUR calendar. The tournament is the longest running PGA TOUR-sanctioned post-season event.

Here are 11 numbers about this year’s Franklin Templeton Shootout

One of the players to compete this year, and for the second time in tournament history, will be a star on the women’s Tour. Lexi Thompson, a seven-time winner on the LPGA Tour and the world’s No. 5 ranked player among ladies, will play with PGA TOUR rookie Bryson DeChambeau. The 21-year-old becomes the second LPGA Tour player to compete, joining Annika Sorenstam, who played with Fred Couples in 2006.

Two players in the field have won the FedExCup title in the past four years. Brandt Snedeker won it in 2012 and Billy Horschel in 2014.

Five players in the field have participated in the Ryder Cup matches between the United States and Europe for a total of 16 appearances. Matt Kuchar and Luke Donald have the most appearances with four each.

Six different countries will be represented this week at the Franklin Templeton Shootout—Canada, Republic of Korea, England, Scotland, South Africa and United States.

Seven of the 12 teams in this year’s Shootout will be together for the first time.

Kenny Perry has nine top-five career Shootout finishes, which is the best among players in the field. Perry shares the all-time record with Greg Norman and Mark O’Meara. The team with the most top-five finishes in tournament history is O’Meara and Curtis Strange. This twosome accumulated five solid performances between 1989 and 1996 including a victory in the inaugural Shootout.

The 23 PGA Tour players in the field have a combined 10 victories in the past year. Russell Knox and Justin Thomas were two-time winners and Daniel Berger, Jason Dufner, Charley Hoffman, Smylie Kaufman, Kevin Kisner and Brandt Snedeker each won once.

There are 11 players in the field who have competed in the Presidents Cup for an overall total of 27 appearances in the biennial match play event between the United States and an International team. Steve Stricker and Mike Weir have the most appearances with five each.