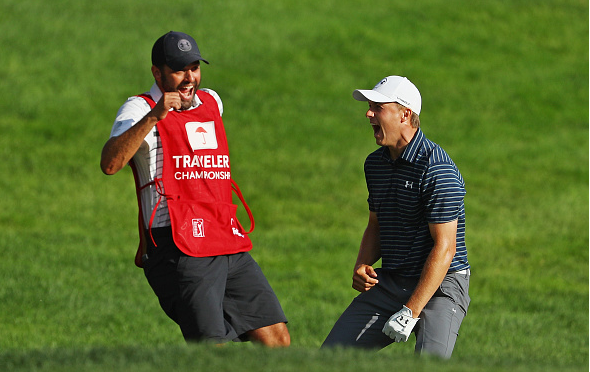 Jordan Spieth made one of the all-time shots in PGA Tour history to win the Travelers Championship. It will be replayed on CBS golf promos for years to come.

It was exactly what the sport needed – the so-called “Golden Child,” playing in sudden death, in front of one of the loudest and rowdiest galleries in recent memory (aside from Phoenix), holes a walk off bunker shot for his record-tying 10th Tour win.

It was simply epic. And it absolutely lit up Twitter, including tweets from fellow PGA Tour pros.
[the_ad id=”19601″]

Justin Thomas sort of started it with a prediction prior to Jordan’s iconic shot.

JT followed it up with a reference to #GoldenChild

Once Spieth’s Titleist disappeared into the hole, and Jordan whipped his wedge while Michael Greller threw his rake, the tweets were fast and furious. Many kidded about Spieth’s superstar image.

Clutch gene ✔️ thank you for providing me with the best chest bump gif ever @michael_greller @JordanSpieth https://t.co/BxH5opS4vA

Hunter Mahan, who finally had a decent start, posted a GIF.

The guy on the losing end, Daniel Berger, was all class.

Hopefully the next time @JordanSpieth does that I'm on his team and I can chest bump him too !!

The current world No. 1 was, well, pure DJ – short and succinct.

Danny Lee sent a congratulations to Jordan, as well as a thank you to the tournament.

What a finish @JordanSpieth ? had great time @TravelersChamp it's always one of my favorite event on pga tour!!!