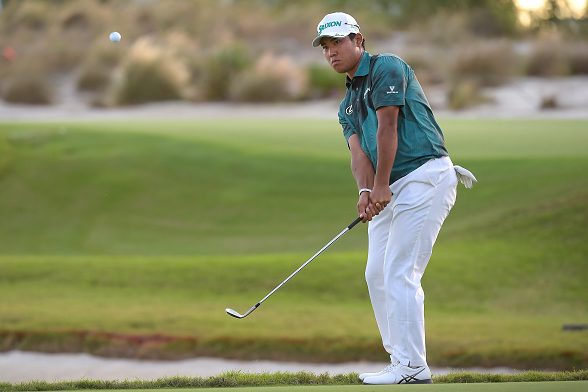 There’s hot play, and then there’s what Hideki Matsuyama is doing right now. The 24-year-old from Japan, who has three wins and a runner up in his last four events worldwide, is absolutely annihalating the elite field at the Hero World Challenge in the Bahamas.

After a seven-under 65 in the third round, Matsuyama is at -19 and boasts an incredible seven stroke lead over the two who share second place: Open Champion Henrik Stenson and reigning PGA Tour Player of the Year and U.S. Open Champion Dustin Johnson.

In a tournament that has been dominated by the ubiquitous coverage of the return of Tiger Woods, Matsuyama looks like he is on a different planet than everyone else right now.

As for the aforementioned Tiger, his comeback took another large step forward when he birdied four of his first five holes on the way to a two-under 70. He currently sits alone in 10th place.

Matsuyama started the day in a tie for the lead with Dustin Johnson, but did not share for long. He birdied the first and the third holes, and then hit the accelerator with a birdie-eagle tear on 6 and 7.

He did not play the back nine like someone with an enormous lead, as he chased flagsticks and carded birdies on three of the last five holes.

Even with two bogeys, Matsuyama still had the low score of round 3, a round where the scoring was generally low, but not quite as low as they were in the pristine conditions of round 2. Matsuyama, who recently won the WGC-HSBC Champions (among several other events), will be paired with Stenson for round 4.

For five holes today, fans were treated to the version of Tiger Woods that used to tyrannize the tour. Tiger birdied holes 1, 2, 3, and 5 and reached as high as third place on the leaderboard.

Similar to his first round, however, the rest of his round was something of a struggle, going +2 from #6-on, including a double-bogey on 18 when his shot out of a fairway bunker (he missed his last five fairways) careened into the water.

It was not flawless like his second round, but overall, Tiger seems encouraged by his first competitive performance in nearly 16 months.

Going into round 3, the only player not in red numbers was PGA Champion Jimmy Walker, who was at even-par after a disappointing second round 74. Not wanting to be left further behind, Walker birdied 8 holes, including four of his last five, to shoot a six-under 66, which tied Stenson for the second best round of the day.

Rickie Fowler, Tiger’s playing partner for the day, bogeyed 17 and 18, but still had one of the best rounds, posting a four-under 68.

Defending Champion Bubba Watson had the round of the tournament on Friday, with a nine-under 63 highlighted by two front nine eagles.

Watson looked anything like that man on Saturday, carding four bogeys and a triple on his way to a three-over 75, a full 12 shots more than his round 2.

The 75 tied Emiliano Grillo for the worst round of the day. Louis Oosthuizen (73) had the only other over-par round in the field.