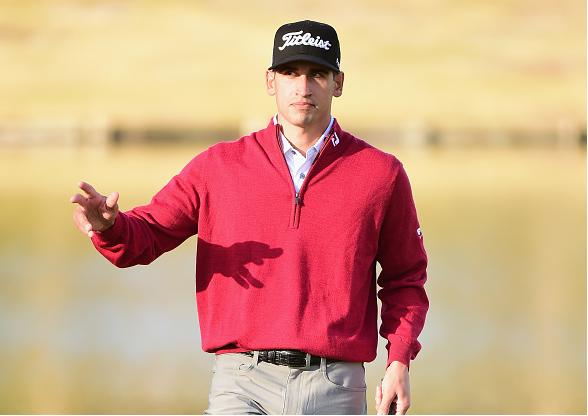 With the 156-man field at the CareerBuilder Challenge in La Quinta, California split among three courses, it can be difficult to tell who is really playing the best golf, even with a leaderboard to look at.

However, after round one, no course seems to be offering a significant advantage: among the top 10 golfers on the leaderboard, four played La Quinta Country Club, three played the Stadium Course (the host course, which everyone who makes the cut will play on Sunday), and three played the Nicklaus Course.

The leader, PGA rookie Dominic Bozzelli, was one of those who started on the Stadium Course, and after his bogey-free eight-under 64, he is one clear of the foursome of Patton Kizzire, Hudson Swafford, Jhonattan Vegas, and Harold Varner III.

Aside from Bozzelli’s lead, the other big story out of La Quinta is that fan favorite, and two-time CareerBuilder Challenge champion, Phil Mickelson was healthy enough to tee off, and he played well – shooting a 4-under 68 at La Quinta Country Club.

The first-round 64 is quite a surprise from Bozzelli, who has spent the past several years exclusively on the Web.com Tour.

The 25-year-old Auburn graduate has been less than impressive in the first 5 starts to his rookie season, going T35-T57-CUT-CUT-CUT – which places him at 164 in the FedEx Cup standings. Still, something clicked for Bozzelli today in his first event in nearly two months.

The rookie from Rochester, NY eagled the par-4 14th hole, his fifth hole of the day, and kept the foot on the accelerator down the back nine, with four birdies over his final six holes – aided by Bozzelli’s accuracy (hitting 14 of 18 greens in regulation).

Phil Mickelson had played just once since the Ryder Cup, a T8 at the Safeway Open back in October. There was legitimate concern that Mickelson might have to withdraw before the start of the tournament, as he is still in recovery from two hernia surgeries.

Mickelson’s back nine was a bit more subdued, with seven-straight pars and then a bogey-birdie finish. He had risen as high as second on the leaderboard for a while, but settled for a T25, four strokes behind Bozzelli.

Aside from Bozzelli, who was on nobody’s radar coming into the week, several other players in the field were much better than expected.

A 2-under 70 might seem pretty ordinary for most players, but for Australian Steven Bowditch, who is coming off an absolute nightmare season on Tour, it is tantamount to a 60 for a lot of players.

Bowditch amazingly was bogey-free, and was just one stroke away from doing something he did not do a single time in 2015-16: shoot a round under 70. He ranked outside the top 60 in the field in both driving accuracy and greens in regulation, but scrambled well and was great on and around the greens.

Hunter Mahan, formerly considered one of the best on Tour, has backed up his worst season on Tour, by far, with four straight missed-cuts to start his 2016-17 season.

However, Mahan looks to be in great shape to make his first cut of the year after shooting a 3-under 67 in th opening round.

Ryan Blaum had eight birdies on the day and was an impressive 3/3 on sand saves to put himself into a tie for 6th place. Blaum, the 366th ranked player in the world, finished T74 at last week’s Sony Open in Hawaii.

With all the low scores being posted in the opening round (78 golfers were under par), a 1-under 71 from defending champion Jason Dufner is disappointing.

Dufner looked ready to make another run after bouncing back from bogeys on 7 and 8 with birdies on 10 and 11, but a bogey and seven pars over his final eight holes left him where he currently sits – in a share of 79th.

Jamie Lovemark was a popular pick this week after going T4 and T6 in his last two events, and finishing T6 at last year’s CareerBuilder, but a bogey-double bogey stretch on 12 and 13 led to an even-par 72 – which places him outside the top 100.

Emiliano Grillo, the 2016 PGA Tour Rookie of the Year, made it all the way to the Tour Championship at East Lake last season, but an opening round with three bogeys and double has him at +2 for the tournament and in a tie for 132nd.

“Yeah, definitely. It was nice to have a little bit of break, I refreshed a little bit, recharged my batteries. I’ve been working hard, doing all the right things off the course and training hard, and it’s always nice to see it pay off a little bit”.
–Dominic Bozzelli, first round leader, on whether he saw this round coming.