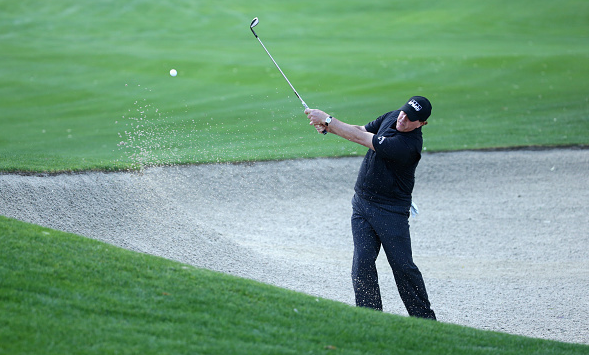 The first round of the CareerBuilder Challenge is in the books and 25-year-old Dominic Bozzelli is leading the way. The PGA Tour Rookie opened up with a 64 at PGA West’s Stadium Course.

Let’s take a look at the day’s three best shots.

Bozzelli’s start to his rookie season has been uneventful, missing the cut in 3 out of 5 tournaments. However, Bozzelli leads by one after the first 18, and carded his best ever round on the big tour by 5 shots.

Shots like this perfect approach at the 14th sure helped his cause.

He was in the zone today.

Both Mickelson and his caddie, Bones, went under the knife this offseason but that didn’t stop Mickelson from opening up with a 68.

After a poor bunker shot at the 16, Mickelson found himself scrambling to save par and he did just that. Mickelson pulled the flag, like he always does, and made his chip from just off the green look like an easy par.

A four-time winner on the PGA Tour, Baddeley had an up and down day but ultimately finds himself at 3-under after round one. Baddeley’s front nine featured an eagle, birdie and two bogeys.

However, Baddeley’s second eagle of the day came while playing his 17th hole, the par-5 8th. After hitting his approach shot right of the green, Baddeley hit an incredible flop shot that found the back of the cup.

Always fun to watch … especially when it goes in.#QuickHits pic.twitter.com/YG5mEWu2vp