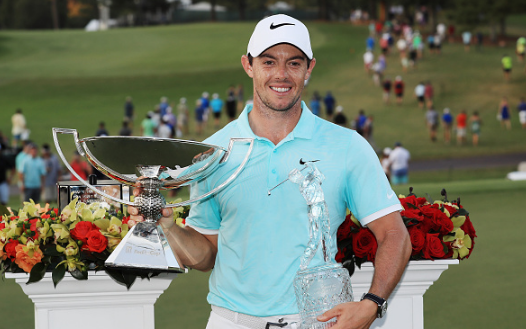 Johnson, either the leader or co-leader after each of the first three rounds of the Tour Championship, struggled badly on Sunday, shooting a three-over 73, the worst round in the field on a day where nearly the entire leaderboard was multiple strokes under par.

Even in spite of that poor round, however, Johnson’s hopes for the $10 million FedEx Cup were still alive and well, if only someone other than Rory McIlroy won.

An incredible eagle-two on the 16th hole launched Rory near the lead, and then a missed putt on 18 from Moore, meant a three-way playoff between McIlroy, Moore, and Chappell.

A McIlroy win meant he would take the FedEx Cup, a win for Moore or Chappell would also be a win for Dustin Johnson. A thrilling playoff that extended for four holes (Chappell was eliminated on the first playoff hole) ended with McIlroy hitting another incredible shot on 16, this time a lengthy putt for the win.

How Rory Did It

Rory McIlroy won the Deutsche Bank Championship three weeks ago with a six-stroke comeback in round 4. Again, at East Lake, McIlroy made an inspired comeback, making up five strokes on the back nine to get into the playoff with Moore and Chappell. He had been hanging around the first page of the leaderboard, but things got serious for him with the eagle-two on 16.

A nice bunker shot on 18 led to a birdie, and got him to 12 under with a six-under 64. On the first playoff hole, Rory missed a short eagle putt that would have sealed the victory then, but he made up for that miss with the birdie clincher on the fourth playoff hole, after Ryan Moore had just drained an even longer par putt.

McIlroy finished third in the field in driving distance, and that considerable distance over Moore and Chappell were of enormous benefit late. He also finished second in greens in regulation for the week.

What it Means for Rory

It is not a major, but it does put an exclamation point on the end of a season that had been considered at least a mild disappointment. He now finishes the season with seven top-10s and the one victory. He is also likely to be playing with confidence at next week’s Ryder Cup, a scary proposition for Team America. McIlroy became the seventh consecutive Tour Championship winner to also win the FedEx Cup.

While Ryan Moore was not able to finish off what would have been his second victory of the year (he recently won the John Deere Classic), he may be a huge winner in another way. American Ryder Cup Captain Davis Love III is due to make his last Captain’s picks tonight, and Moore has figured to have put himself in a great spot for that.

If it’s not Moore, it would likely be either Ryder Cup vet and two-time major winner Bubba Watson, who rode a 66-67 weekend into his first top 10 since March, or Justin Thomas who finished in a tie for sixth with Dustin Johnson. Jim Furyk is also believed to have an outside chance. The pick will be announced during halftime of NBC’s Sunday Night Football.

“It was incredible! As I said at the beginning of the day all I wanted to do was concentrate on winning this, the Tour Championship. I couldn’t control what anyone else did, I just needed to come out here and play a really good round of golf, and somehow I was able to tie it up in regulation. I played with Ryan [Moore] all day, who played phenomenally well, big credit is due to him, he’s playing fantastic golf and has been over the past few months, and he should be really proud of himself. I just wanted to go out here and play the way I’ve been playing. I’ve played really well this week, and I feel like my game is coming together at the right time, two wins in the last three feels pretty nice.”
–Rory McIlroy, winner of the Tour Championship and the FedEx Cup.