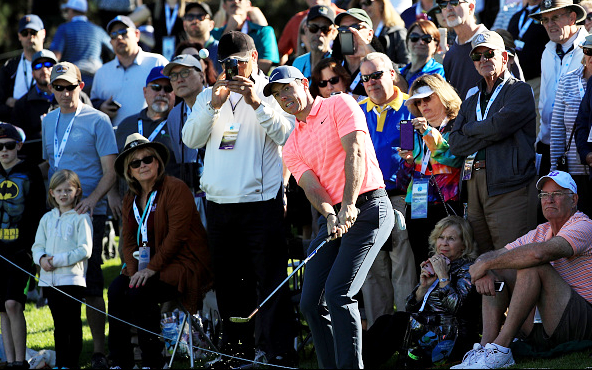 In his debut at the Pebble Beach Pro-Am, Rory McIlroy shot an opening-round 4-under 68 at Spyglass and sits T16 at 4-under par. 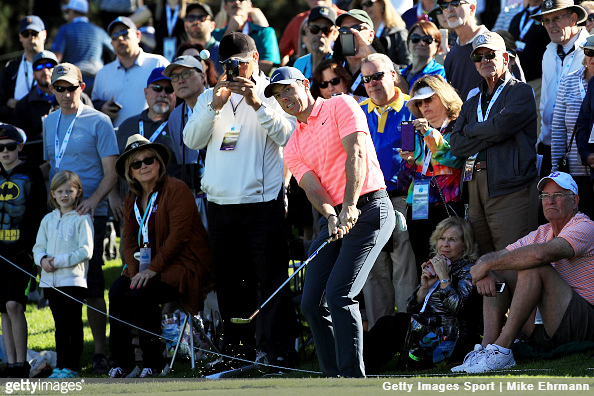 The four-time major winner, who is teamed up with his father Jerry (-2) this week in the team portion of the event, finished the day with six birdies against two bogeys.

The McIlroys as a team are tied for 44th at 6 under.

Afterwards, the Northern Ireland superstar sat down with the press to answer some questions. Here’s a transcript:

I was happy with my round. I think that any time you can get it around in a decent score at Spyglass in this tournament, it’s sort of the tougher of the three golf courses out of the way. So, yeah, I was pleased. I recovered well. A couple of messy holes coming in. In the end made a good bogey on 16. Made a great par on 17. It was nice to finish with a birdie at the last. So all in all pretty pleased.

If your dad didn’t play well, it still had to be fun being out there with him?

MCILROY: It was awesome. It was great being out there with him. It’s been such a good week so far.

He went over and he abandoned me on Monday to go play Cypress, which is understandable. And then we have had a blast the last few days.

We played Pebble on Tuesday, Monterey yesterday, and then here today and it’s awesome. The weather and just everything, it’s been a really good week so far. 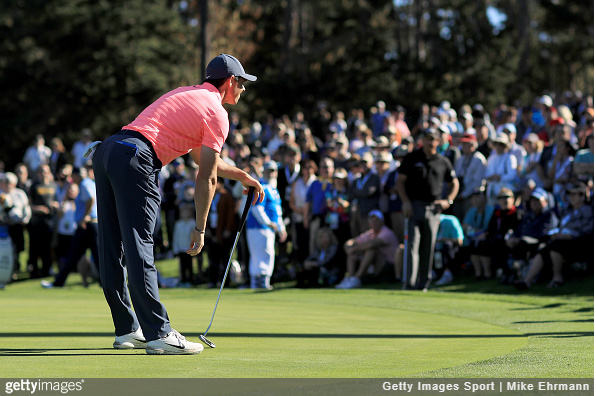 You’re in contention, you guys are together, fun three days ahead for you.

MCILROY: Yeah, for sure. Did you play Spyglass before today?

MCILROY: I played on Monday, as my dad was over at Cypress, so, yeah. Did you see anything funny or goofy out there, your dad?

MCILROY: No. He, like we played early in the morning so there’s a few shadows out there, and I was about to take my driver away on the 7th hole and I saw his shadow move. So I backed off it. I said fine, standstill. Blocked it way right and hit my second in the water. So I’m like, hard to say anything, chipped in for birdie. So I was like, you’re forgiven.

But no, he was good out there and like Jimmy and him have a blast. They’re both members at Seminole and see each other all the time. And I’ve developed a really good relationship with Phil over the past couple years and it was a really nice group.

Did it feel any different being out there with your dad?

MCILROY: A little bit. I mean I’ve had it before at the Dunhill where it feels a bit different. And sometimes I get too much carried away with the team aspect and not actually, this is a golf tournament and there’s a lot of World Ranking points at stake here and whatever.

So I sort of made a conscious effort this week to treat it as that and not warm up right next to him, not — actually get my, I don’t know, my game head on and just sort of try and go through the things that I need to do to play well. It worked today, I guess, so.

Is this the best that you’ve felt at this point in the year in a while?

MCILROY: Yeah, I feel good. A couple of really good weeks in the Middle East. But, yeah, like I’m healthy and I’m able to practice, I’m able to do everything I want to do, so I feel good.

I’m in a really good frame of mind and that helps too.

Did you get practice rounds in on all the courses here?

MCILROY: Yeah. I got in Sunday night and then, yeah, I played Spyglass here on Monday, Pebble Tuesday, Monterey Wednesday. That’s another kind of aspect to this that makes it a little bit more challenging?

MCILROY: Yeah, for sure. I’ve played Pebble before, but only for two rounds in 2010 U.S. Open. Feels a long time ago. I played with Tom Watson those two rounds, so that’s — yeah, that makes me feel old.

But, yeah, and I remembered Pebble, but I didn’t remember the nuances of it or how small the greens were or how you really can’t leave yourself above the hole. I didn’t really remember all that. So to be able to go out and play and refresh my memory with all of that was good.

Have you played with Phil since Valhalla?

MCILROY: Yeah, I played with him in Mexico last year. Bones and I were running to the toilet every other hole. (Laughter.) Is there any part of your game that’s not working right now?

MCILROY: Everything’s pretty good. I scrambled, I’m scrambling well when I need to. I feel like I’ve made good strides with my putting over the off season. Driving the ball good.

Everything — from when I spoke to you guys last until now, everything, I feel, has gotten better, which is a good thing. So, no, I feel really comfortable with it all.