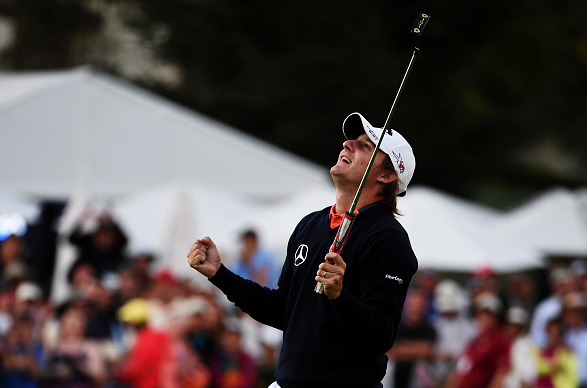 Between the Tour Championship and Ryder Cup, the 2015-16 PGA Tour season could not have ended in more exciting fashion. At East Lake, Rory McIlroy fought off all competition down the stretch, eventually defeating red-hot Ryan Moore in extra holes.

That playoff victory also nudged McIlroy ahead of PGA Tour Player of the Year Dustin Johnson in the final FedEx Cup standings, netting the already ridiculously-rich McIlroy the $10 million FedEx Cup prize, the biggest in sports that happen outside the ropes of a high-caliber boxing match.

The Ryder Cup featured the Americans dominating Friday morning, but a great comeback by the European side in the afternoon. They traded blows on Saturday before Davis Love III’s American squad pulled ahead in Sunday singles to win their first Ryder Cup since 2008.

The bar has been set sky-high for the 2016-17 season, which opens this week at the Safeway Open in Napa Valley at Silverado Resort & Spa. All the buzz going into this week was on Tiger Woods, who had committed to the tournament, his first action in 14 months after he took off last season to recover from multiple back surgeries.

Unfortunately, Tiger withdrew on Monday, expressing grave concerns over the vulnerabilities of his current game. Fans likely would have excused a poor Tiger performance due to the extended layoff, but Tiger is one of sports ultimate competitors, and he did not want to take a spot in the field with his game not at 100%.

Regardless, just as golf survived last season without Tiger, the Safeway Open too should still be a great event. It is the first stop on the new PGA Tour season, and 144 professional golfers will be looking to get their season off to a dream start. Even sans Tiger, the field is plenty strong with the likes of Phil Mickelson, Paul Casey, Emiliano Grillo, and Olympic Bronze Medalist Matt Kuchar among those participating in the kickoff event.

It’s a new season and everything has been set back to zero: money, FedEx Cup points, etc. With everyone on equal footing, who will make the first move?

The golf course at Silverado Country Club began in 1955, undergoing a redesign by golf design prodigy Robert Trent Jones Jr. The course held its first PGA Tour event from 1968 to 1980 where it was first called the Kaiser International Open and later the Anheuser-Busch Golf Classic.

The event we now call the Safeway Open was first played in 2007, when it was decided that it would be the first event of the Fall Series. From 2007-2015 it was called the Frys.com Open, with this being its first year as the Safeway Open. Since 2013, this tournament has been the opening event of the PGA season.

The defending champion is Emiliano Grillo. It was the first start of Grillo’s rookie season, a successful season where he made it to the Tour Championship at East Lake and finished 11th in the final FedEx Cup standings.

The Argentine Grillo nailed a long putt on 18 to get into a playoff, where he knocked off Kevin Na on the second extra hole for the victory. The trio of Tyrone Van Aswegan, Justin Thomas, and Jason Bohn. A third round 65 was the catalyst of his tournament, getting him to close to the lead after three rounds.

Silverado Record: Sangmoon Bae finished at 273 in his 2014 victory, and was matched a year later by Emiliano Grillo and Kevin Na.

Fan favorite Phil Mickelson is in a position that is familiar to him, although he has not been there in over a year: second fiddle to Tiger Woods. Days ago, all the buzz and talk surrounding the Safeway Open was about Tiger Woods, who originally had committed to this tournament, his first competitive golf event in 14 months. However, Tiger withdrew on Monday, and now the spotlight shines back on Mickelson.

Despite being 46, an age that for most is well past their prime, Mickelson is coming off one of his finest seasons as a pro. No, he still has not won since shocking the golf world during the 2013 Open Championship, but his best in 2015-16 was as good as anyone’s best. He is coming off a season where he finished in the top 5 six times, and finished an incredible fifth in scoring average, just 0.4 strokes behind leader Dustin Johnson. Jason Day, Adam Scott, and Jordan Spieth were the only others to finish higher in that statistic.

The craziest thing about Phil’s incredible season was that his two legendary performances both came in losing efforts. It took a all-time record major for Henrik Stenson to hold off Phil at The Open Championship, with Stenson finishing 20-under, Mickelson at 17-under, and the next best (J.B. Holmes) at six-under. He was flawless on Sunday, and against almost anyone else in history, Mickelson wins his second Claret Jug.

Then again, at the Ryder Cup, his most recent round of competitive golf, Mickelson was one of the Sunday stars for the Americans finishing with 10(!) birdies in his singles match against Sergio Garcia. Sergio, one of the greatest players in Ryder Cup history, matched Phil nearly shot-for-shot and the match drew to a tie. 46-year-old Phil at the Ryder Cup looked as good as he ever has in his illustrious career. If he hits the proverbial career wall at some point, it sure does not look like it will be soon.

So, what can we expect from Lefty this year? We will get to see earlier than usual, as he typically sits out the fall events. Last year, his first event was a 21-under T3 at the Career Builder Challenge in late January. He comes into this tournament as one of the favorites, and a great performance would not surprise anyone. The ageless wonder is determined to not be one of the majority who limps into the Champions Tour at age 50.

2. The Next Emiliano Grillo?

There are 38 players in the field who earned their PGA Tour Card through either the Web.com Tour money list or the Web.com finals. Each one would give anything to be this year’s Emiliano Grillo, who went from Web.com star to PGA champion in just his first start as a full-fledged Tour member.

The group is arguably led by Wesley Bryan, who is a full-time PGA Tour member this season as three Web.com wins earned him an in-season promotion in 2016. Bryan, most known for his mesmerizing trick shot videos, finished T8 at the John Deere Classic, his first tournament after the in-season promotion. He comes into the Safeway being the Web.com Tour’s reigning money winner, with nearly $500,000 earned in 2015-16.

Grayson Murray, took third and then first in the final two events of the Web.com finals, and was the only other player over $400,000 on the year. Murray had an extremely up-and-down season, finishing in either the top 10 or missing the cut in 15 of 17 Web.com events, but comes into the season as the hottest hand among Web.com graduates.

Other Web.com notables in the field for the Safeway include Ryan Armour, Brian Campbell, Ollie Schneiderjans, Cameron Smith, and Olympians Seamus Power and Cheng Tsung Pan. This field is replete with players who are hoping to get compared to Grillo.

Kuchar is coming off another successful season where he was a top-10 machine, finishing with 10 (only Dustin Johnson and Patrick Reed had more). He also took great pride in winning the bronze medal at the Rio Olympics.

However, his year also had considerable downs as he was not a factor in any major, with a T24 at The Masters being his best major finish. He is also coming off a thoroughly unimpressive Ryder Cup performance that ended with a come-from-ahead loss to a reeling Martin Kaymer in singles. His last win was at the 2014 RBC Heritage, as he has accumulated 21 top-tens since that victory.

Casey’s season was mostly quiet, but he was tremendous in the FedEx Cup playoffs, with three top-4 finishes in the last three events. After a T31 at the Barclays he finished runner-up at the Deutsche Bank Championship, runner-up at the BMW, and then solo-fourth at the Tour Championship.

He was one of the five players who would have taken the FedEx Cup with a win at East Lake. He finished fifth in those standings. Casey also finished T4 at The Masters and T10 at the PGA Championship. He is hoping his FedEx Cup momentum will carry over into the new season.

Rahm declared pro after a T23 at the U.S. Open as an amateur, and was fantastic in his first pro starts, easily earning his Tour card via the money list. The 22-year-old Spaniard took T3 in his first professional start, the Quicken Loans National, and also went T2 at the RBC Canadian Open and T14 at the John Deere Classic.

If he had had enough starts to qualify for official statistics, Rahm’s 306.9 driving distance average would have been good for a tie for seventh on tour, and his 68.15 GIR percentage would have ranked in a tie for 33rd. His all-around game looks sound, and he stands a great chance of becoming a star with more experience.

Na took second place at this event last year, losing a playoff to Grillo. It was the first of a very hot start to 2015-16 for Na and he took T2 and T3 in his next two events. He was terrible in the season-ending Tour Championship, but even qualifying for that says great things about his game.

It can also probably be excused, since he just became a first-time father during the FedEx Cup playoffs. We do not know how much practice he has been getting lately, but he is definitely among the favorites to take the Safeway.