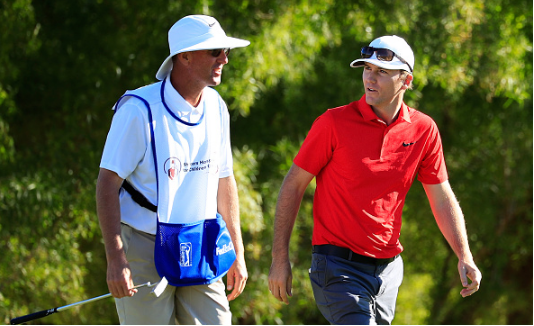 Old friend Lucas Glover finds himself atop the leaderboard at 15-under at the Shriners. The former U.S. Open champ fired a second-consecutive 65 and leads by one-stroke over Rod Pampling and Brooks Koepka.

Rounding out the Top 5 after 54 holes in Vegas are Russell Henley and Geoff Ogilvy, who are tied for fourth at -13.

All in all there are 11 players within 3 shots of the leader, so it should be an exciting Sunday finish at TPC Summerlin.

Here’s a roundup of quotes from the top 5 after the day number 3 at the Shriners Open.

On The Par 5s at TPC Summerlin: “You have to every week, to be fair. But here, yes. I don’t prepare for it at home like say you would hitting a draw at Augusta, stuff like that. But I mean, you know when you get here that you’ve got to take advantage of them. They’re all reachable, and if you hit good tee shots, they’re all reachable with irons. I haven’t played 13 so well, but the other two I’ve done okay on.”

On Improvements for Final Round: “We’re about to go to the range right now, just going to fix this pull draw and make sure the speed of these putts are where they need to be. I don’t know if it was just a little bit of being tentative, because the greens are getting very firm and a little crusty, and then I guess that’s what it was. They looked a lot faster than they are.”

On His Round, Overall: “Nothing special. I think we just all struggled out there today. It wasn’t a group that we could feed off each other. It wasn’t good, but at the end of the day, we’re only one away, so you can take something out of that and go to the range now and just sharpen up a few little things. Nothing really stood out that was bad, but just didn’t post a score. You know, thankfully with a good score on the first day, I’ve been able to have a couple so-so days, so tomorrow I’ll have to go low. Simple.”

On His 3-Round Consistency: “Yeah, it’s been nice. Had a big break kind of the end of the summer. Not too many Playoffs to play in for me, so I had a big break, and I was a bit rusty when I came back to Napa and Jackson last week, so it’s nice to hit a few better shots and roll a few putts in really, which is a big difference. Hopefully it hangs around somewhat close to the lead. As I said, the finish here is pretty gettable, so I’m sure guys will get a few better than where I’m at right now, but I’m within a shout tomorrow, for sure.”