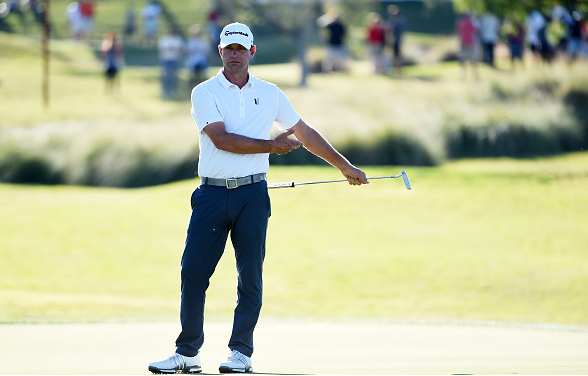 There were a lot of low scores posted in round 3 of the Shriners Hospitals for Children Open. With their great Saturdays, many players who were forgotten after the first two rounds suddenly find themselves in contention.

If you are of the belief that anyone within five strokes on Sunday has a chance, that makes an astounding 24 players who could be holding the trophy in Vegas. Basically everyone was shooting low in round 3, everyone that is, except for the leaders.

The final group of Mr. 60 Rod Pampling and Brooks Koepka combined were just one under par. Aaron Wise was in third place coming into the weekend, and shot even-par, one of just a small handful of rounds at TPC Summerlin that did not end in red numbers. Chris Kirk was tied with Wise going in, and now sits in a tie for 36th place after a four-over 75.

As a result, the leaderboard has tightened up significantly. The man now at the top is former U.S. Open Champion Lucas Glover, who shot his second straight six-under 65 to get to -15 for the tournament.

The duo of Pampling and Koepka are now tied for second at -14, and one stroke behind them is Russell Henley and Geoff Ogilvy, who both vaulted into contention with low third rounds.

Glover, who is coming off a T5 at the Sanderson Farms Classic, and is coming off easily his first season in five years, had only one blemish on his round 3 scorecard: a bogey five on the par 4 third hole.

Otherwise, he had five birdies and eagled the par-5 9th hole to shoot 65. He was not especially accurate off the tees, hitting just 7 of 14 fairways, but he was fantastic with his putter, with 2.65 in strokes gained putting, a phenomenal number for anyone, but especially for Glover who has been absolutely abysmal on the greens in recent years.

If he can keep making improvements with the flat stick, we could see the form we saw when Glover won the 2009 U.S. Open.

The biggest move of the day came from two-time PGA Tour champion Russell Henley, who shot an eight-under 63 to vault from a tie for 36th into a tie for 4th. Henley’s 63 was bogey-free and showed tremendous precision: he hit 16 of 18 greens in regulation and missed nothing with the putter.

Also bogey-free was Scott Piercy, who continued the hot form that has given him two tops 10 in just three events so far this season. Piercy shot a six-under par 65 that featured long (325 yard average) and accurate (10 of 14 fairways) driving.

Relatively anonymous for most of his career, Piercy became more well-known among fans last season when he had runner-up finishes at both the U.S. Open and the WGC-Bridgestone Invitational.

It well-illustrates how low the field played in round 3, that Jon Rahm shot a two-under 69 and STILL dropped nine spots, all the way to a T21. Rahm’s nines were diametrically opposite each other: his front nine had five birdies to three bogeys while his back nine had just one of both.

Tied with Rahm, but having dropped even further to get there, former PGA Champion Keegan Bradley was even-par on the day, despite three birdies over his last four holes. Chris Kirk had only one birdie in his round of four-over 75, which is inexcusable with the scoring conditions he had.

“That eighth hole was kind of the catapult. Made that long one and two great shots into nine, made the turn in three-under and kept it going. Speed wasn’t good through seven holes, I hit good shots, but they weren’t getting to the hole. On 8, I had a nice uphill one I could get aggressive with from a long way away, it had to trickle in and my speed was good the rest of the day, so I’m pleased with that.”
–Lucas Glover, third round leader.