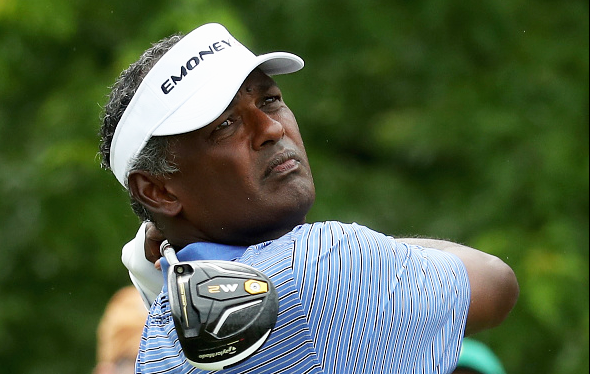 Vijay Singh fired a 5-under 67 at a rain-softened Trump National, and heads into Sunday’s final round of the KitchenAid Senior PGA Championship with a one shot lead over Bernhard Langer, who posted a 2-under 70 – ending a stretch of seven straight rounds in the 60s.

Singh is at 15-under 201 for the tournament, primarily due to his power game. The 54-year-old Fijian has played the 12 par-5s at President Trump’s course to 10-under this week, while averaging 291 yards off the tee to lead the field.

Langer, meanwhile, struggled for much of the day with accuracy (off the tee and to the greens) but was bailed out by his scrambling ability. The 59-year-old German is at 14-under.

Billy Andrade closed strong with three birdies on the back nine and continues to hang around. He is three back of the lead at 12-under. Bob Estes, who was a surprising early-round contender at the PGA Tour’s Valero Texas Open, shot 67 and was alone in fourth, five shots behind.

Langer and Singh will be paired in the final group with Scott McCarron, who posted a third-round 73 and is at 9-under, tied for fifth with Larry Mize and Miguel Angel Jimenez.

Langer, in the meantime, will be seeking to make an even a bigger impact on history, as a win would give him nine senior majors, breaking a tie with Jack Nicklaus. Additionally, he’d become the only player in history to win all five senior circuit majors.

It sets up what should be an epic Sunday duel between two major champions and Hall of Famers.

“I’m playing well and I’m hitting my ball pretty good. I had a couple of hiccups with my putter today but I came back strong. I think it’s going to be a good match.”
–Vijay Singh

“I missed a couple of greens, more than a couple, that I would normally maybe not or wish I wouldn’t miss. But I got some of them up-and-down and so I’m still in a good position, I would rather be two ahead than one behind, but there’s a lot of golf left tomorrow and we’ll see how it plays out.”
–Bernhard Langer