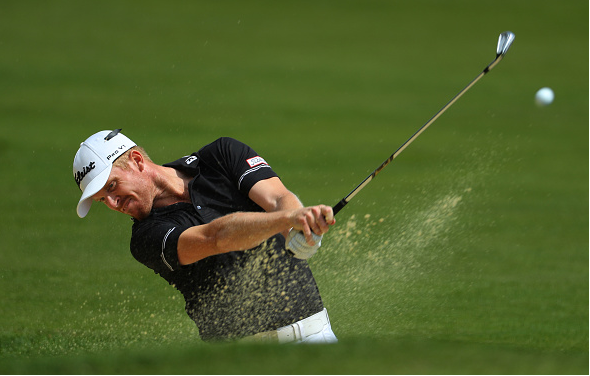 Australia’s Andrew Dodt fired a 4-under 68 on Saturday at Wentworth to get to 8-under at the BMW PGA Championship. The Aussie will take a one-stroke lead into Sunday’s final round .

South Africa’s Branden Grace is one back of Dodt, and alone in second at 7-under, following a third-round 2-under 70.

Lee Westwood (72) and 54-hole co-leader Francesco Molinari (74) are three shots back at 5-under, tied for third.

Sweden’s Henrik Stenson posted a 1-over 73 to drop a shot, but the Open Champion is still just four back of the lead at 4-under. He is tied for fifth with Ireland’s Shane Lowry and Japan’s Hideto Tanihara.

The two other 54-hole co-leaders, Belgium’s Thomas Pieters and Scott Jamieson of Scotland, were awful on Saturday, shooting 78 and 76, respectively, to drop out of contention.

Thomas Pieters carded a 6-over 78 on Saturday to drop out of contention. But his round could have been worse if not for this long bomb putt for birdie.

Chip of the Day

When he's not surprising nine year old's on their birthday, @BeefGolf is pretty good at golf. pic.twitter.com/mGguVtjGF3

Fan of the Day

A little side of beef.