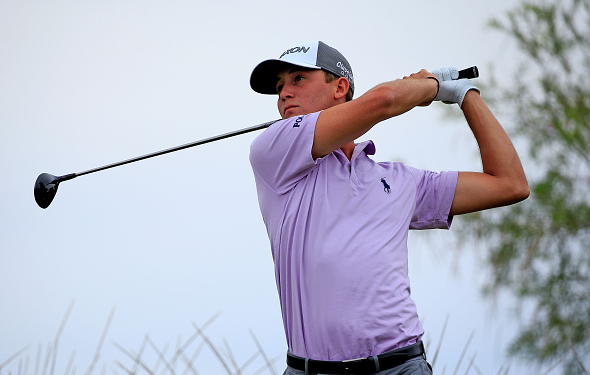 Smylie Kaufman is one of the more well-known golfers on tour basically for two reasons, and both are largely related to Jordan Spieth.

First, he played in the final group with Spieth at The Masters last year, his first Masters appearance, and just his second appearance in a major.

Secondly, he was 25% of the foursome that made up #SB2K16, the dream vacation to the Bahamas that induced envy all over the world.

What many people have forgotten (or never knew) about Smylie, however, is that the Shriners Hospitals for Children Open is the tournament that first put him on the map.

“Winning [the Shriners Open] was one of those days where everything clicked, a day that changed my life,” said Kaufman in a pre-tournament interview.

His final round 61 made up a seven-stroke deficit and led to a victory in just the second tournament of his rookie season. The win kept him in the rookie of the year race all season, which he would closely lose to Emiliano Grillo.

Kaufman’s rookie season was up-and-down and it is unknown exactly what kind of form he’s in now.

While he did play in the final group at The Masters, his final round 80 dropped him to T29.

The final round meltdown was excusable for a young player in his first Masters, but Kaufman largely struggled after that frustrating Sunday. He went on to miss eight cuts in his next 11 events, and didn’t really contend anywhere for the rest of the season.

His T10 at the Quicken Loans National was encouraging, but was something of an outlier when looking at the second half of his season.

Things may be turning back around, though.

The week prior to his Shriners breakthrough last year, Kaufman finished T10 at the Frys.com Open, his first event of the 2015-16 season. This year, he is not quite coming in as hot, missing the cut at the season opening Safeway Open, and then finishing T45 at the CIMB Classic in Malaysia.

He has shown the ability to compete anywhere, but is his current game good enough to successfully defend in Vegas?

Kaufman is relishing the vibe of being back at TPC Summerlin. “As soon as I walked in the door, I had good memories being in the media room,” Kaufman said Wednesday.

We will see how that translates on Thursday – on the course.