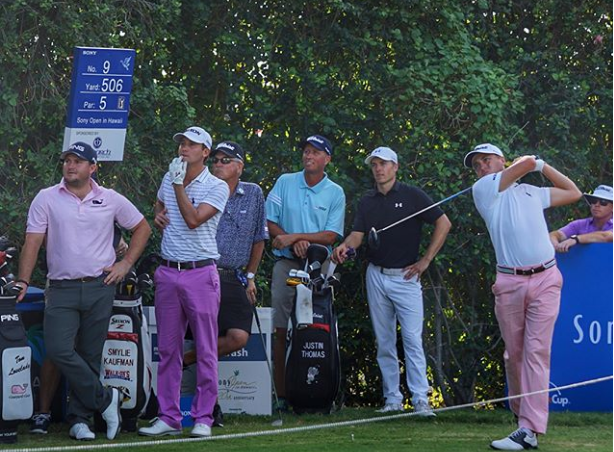 The picturesque Waialae Country Club is once again the host venue of the Sony Open, the second stop on the two-tournament Hawaiian Swing to kick off the 2018 PGA Tour schedule.

The headliners this week in Honolulu, Jordan Spieth and Justin Thomas, were joined by friends Smylie Kaufman and Tom “T-Love” Lovelady, along with a famous new caddie, during Tuesday’s practice round.

Here’s a round up of some photos via PGA Tour, as posted to Instagram.

Justin Thomas will have Jim “Bones” Mackay on the bag this week, as Jimmy Johnson deals with a foot injury.

Spieth and Thomas were joined by buddies Tom Lovelady and Smylie Kaufman in Tuesday’s practice round. The second photo in the gallery is neat, showing Thomas teeing off with Spieth, Bones, Thomas’s dad (Mike), Kaufman, and Lovelady watching the ball flight.
(A photo gallery. Hover and click arrow.)