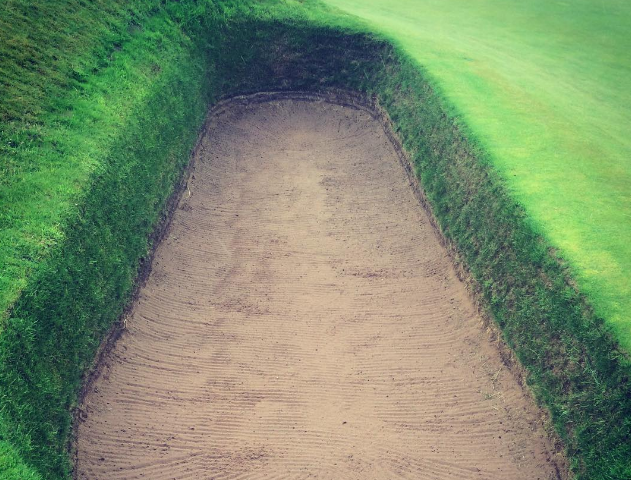 Royal Troon’s par-3 8th hole, better known as the “postage stamp,” has the ability to send players home early if they aren’t precise with their tee shots.

The hole is only 123 yards but the green is tiny, hence the “postage stamp” nickname bestowed upon it by Golf Illustrated’s Willie Park, who wrote that the green had been “skimmed down to the size of a Postage Stamp.”

The green is surrounded by five deep bunkers, one of which is the famous “Coffin.”

For all its difficulty, the consensus among players is that it’s one of the best holes in golf since it requires precision and cannot be overpowered. The wind can cause it to require anything from a punchy long-iron to an easy wedge, and the scores can range anywhere from the rare hole-in-one to a number in the double digits if you get stuck in one of the bunkers.

Phil Mickelson calls it “the coolest par three that we play.” While Darren Clarke says that “the Postage Stamp is just fantastic.”

The short hole looks menacing even in a digital fly-by.

8 days to go. It's one of the most famous holes in golf, the Postage Stamp 8th @RoyalTroonGC https://t.co/J0s2uxtUa6https://t.co/42AEZSVHHc

In this clip, a man visiting from the United States gets creative with his escape plan from one of the bunkers.

Here is a beautiful photo of “The Coffin”. It looks ready to ruin many players’ rounds.

Back in 2004, Ernie Els took the bunkers, and the entire green for that matter, out of play, and made quick work of the “postage stamp.”

Ernie Els makes a hole in one on the famous Postage Stamp 8th at @RoyalTroonGC in 2004.

By the end of The Open, it will be interesting to look at the ratio of bogeys, pars, and birdies scored here.

At Royal Troon’s 8th, no one is safe.