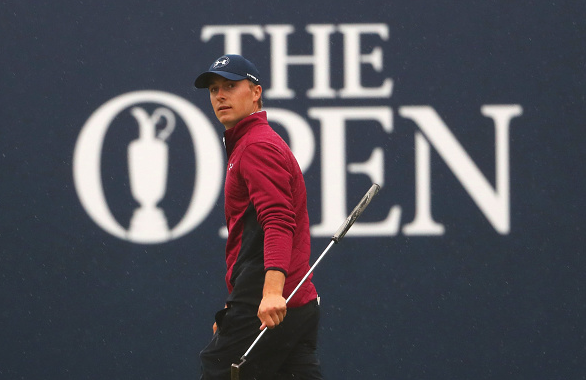 Jordan Spieth posted a second consecutive under-par round at Royal Birkdale and will take a two-stroke lead into the final 36 holes at the 146th Open Championship.

“That chip-in was massive for par. And then we had a stoppage of play and it got a little calm for about an hour or 30, 45 minutes. And that right there from the chip-in on 10 until we got through 12 was really, really important,” said Spieth, who, with a win this weekend at Birkdale, would become one of only four active players on the PGA Tour with wins at three different majors. Rory McIlroy, Phil Mickelson and Tiger Woods are the others.

On the eagle putt, Spieth continued, “I knew after it had missed that bunker it was going to be pretty good. And then Michael and I had a reaction that I think kind of told what the shot was, which we knew it was pretty lucky. And got away with one there. And I was able to knock that putt in, get me to 7-under, which was a place I didn’t think I’d get to today starting the day.”

The two-time major champion was the only player in the 156 golfer field who finished his first two rounds under par.

Spieth will be paired in Saturday’s final group with fellow American, and first round co-leader, Matt Kuchar, who finished the day at 1-over, and is alone in second at 4-under.

The other opening-round co-leader, Brooks Koepka, finished with a 2-over 72, and dropped to 3-under, tied for third with Englishman Ian Poulter (70).

Coming off a bogey on the ninth, Spieth was at 1-over on his round, and looking at dropping at least another shot. But after his Titleist dropped for par, Spieth carried the momentum and birdied the next two holes to get back into the red.

And before the "hooter" was sounded….@JordanSpieth doing Jordan Spieth things ⤵ #TheOpen pic.twitter.com/lZYnxrAZVM

Jordan Spieth holing a chip in pouring rain is like something out of Shawshank Redemption.

Spieth's chip-in for par on 10…does it feel like the shot we'll look back on Sunday as the slingshot to a Jug?

Spieth had just bogeyed the par 3 14th to drop to even-par for the day, but this eagle 3 got Jordan back in the red where he remained.