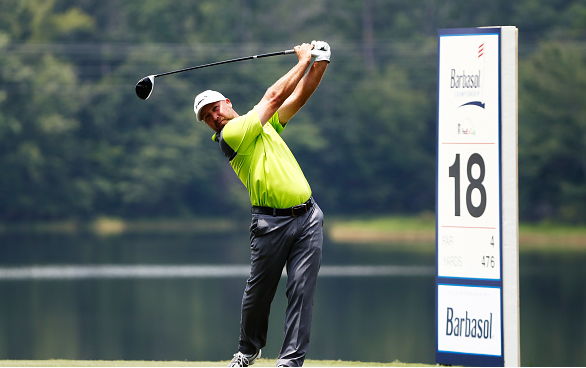 Chad Collins fired a bogey-free 11-under par 60 in the second round of the Barbasol Championship and leads after two rounds in Alabama. The Indiana native had a shot at the historic number 59, but parred both 17 and 18 at Grand National to finish one shot off the magic number.

Collins made the turn at 5-under, and after a par on 10, the former Methodist U star ran off a string of six straight birdies to get to 11-under through 16 holes.

“Hit a good shot, but I hit it a little heavy,” Collins said. “I didn’t think it was going to get back there and it must have had a lot of overspin, hit the downslope, chased back there. I wasn’t sure how close it came to going in, but had to come pretty close. And then the putt was a little tricky. We couldn’t quite figure out if it was kind of right center, right edge or left center, left edge. Just kind of lost a little bit of speed and broke off the left edge. ”

Collins had one final chance on 18, albeit a downhill 70-footer. It went 5 feet past.

“I just got myself out of position off the tee, which you can’t do,” said Collins, who is 170th in the current FedEx Cup standings. “Probably one of the easiest hole locations on the green, so it was kind of unfortunate to not hit the fairway and I probably would have had a better look at birdie there. I gave it a run. I’m not too disappointed at all by 60, so I’ll take it.”

Jim Furyk, who is the headliner this week in Alabama, shot a record-58 last year at the Travelers and is one of eight PGA Tour players to break 60. Both Justin Thomas and Adam Hadwin shot 59s back in January: Thomas at the Sony Open, and Hadwin in the CareerBuilder Challenge.

Chad Collins on his 11-under round of 60 at the @BarbasolPGATOUR: "You never know when a day like that is going to happen." pic.twitter.com/4oKTfubE5R