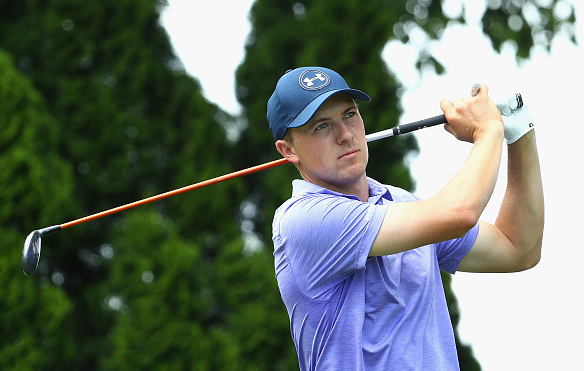 Jordan Spieth’s 1-under 69 on Friday was six shots off his opening-round 63, but it was good enough to maintain a one stroke lead heading into the weekend at the Travelers Championship.

Coming off a near flawless debut at TPC River Highlands, Spieth admitted his second round was a bit off.

“Yeah, it was a battle. I was just a little off today. You know, I didn’t expect to be on to the same level as a 63, but I just got a little bit — the swing was just — it’s close,” said Spieth. “It was just kind of an off day, and I’m glad I was able to still shoot 1-under with an off round.”

The 23-year-old Texan, who started on the back, played to even-par on his first-nine with a double-bogey sandwiched between two birdies.

After two quick birdies at the turn, Spieth was at 2-under on the day, and 9-under on the tournament, with six holes to play. But a bogey on the difficult 233-yard par-3 5th halted the momentum, and from there he played even-par over the final four holes to finish at 8-under through 36 holes.

“Had an opportunity on the front [his back nine] to get to 10-under. That was our new goal. It fell just short, but in a good position,” said Spieth. “For an off day to shoot 1-under and hopefully that’s the high score we post this week, that’s where you need to hold it when you get a little off.”

Tied for second, at 7-under, is Troy Merritt (68) and Patrick Reed (66), who, following a solid performance at Erin Hills (T13, -6), has posted two sub-70 rounds in Connecticut. The Ryder Cup star seems to be coming out of his season-long slump.

“I feel like I’ve been hitting the ball well all year. I feel like I’ve been putting pretty solid. It’s just every once in a while there is something that’s not quite there that day, and the numbers aren’t adding up,” said Reed, who finished with five birdies and one bogey. “Here recently, I feel like scores are starting to reflect how I’m playing and hopefully I can continue it all.”

Wesley Bryan, who posted a second-consecutive 67, and Daniel Summerhays (68) headline a group of four players at 6-under, tied for fourth.

A logjam exists after that with nine players at 5-under, 10 more at 4-under, and too many to count from 3-under to the cut line of even-par. In all, 85 players made the cut of the 150 player field.

A look at how Jordan Spieth is getting it done after two rounds at TPC River Highlands.

“I really wanted to grab two [birdies] a side. That’s kind of my goal. I figured if I get two a side every nine holes that we play this week that will be 16-under, and that will win the golf tournament.”
–Jordan Spieth