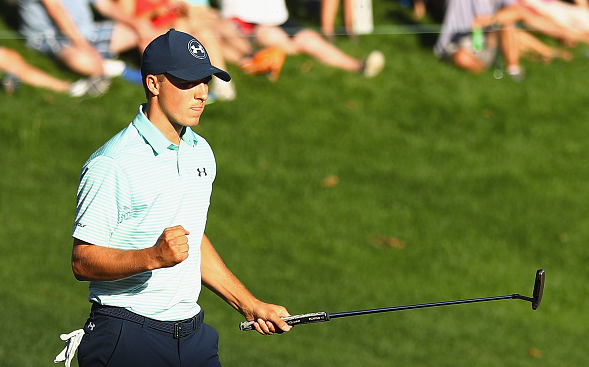 Jordan Spieth fired a 4-under 66 on Saturday at TPC River Highlands, and will take a one shot lead into Sunday’s final round at the Travelers Championship.

Spieth, who has led since round one, finally relinquished the top spot after back-to-back bogeys on 13 and 14, which dropped him to 9-under.

The 23-year-old Texan got those two strokes back, plus one, with birdies on three of the final four holes, highlighted by a 20-foot birdie putt on 18 that had the New England golf gallery sounding more like Gillette Stadium.

With a win on Sunday, Spieth would join Tiger Woods as the only golfers (since 1983) with 10 PGA Tour wins before the age of 24.

Boo Weekley (-11) shot 5-under 65, highlighted by five birdies over the final eight holes, and will join Spieth in the final group.

Recent St Jude Classic winner Daniel Berger is alone in third at 9-under, following a 4-under 66.

Rounding out of the top 5 are Paul Casey, David Lingmerth, and Cheng Tsung, who are tied (T4) at 8-under.

Jordan Spieth nails the chip but whiffs on the slap pic.twitter.com/xD1E8gwBoJ

“I’m going to go out there and play solid golf. That’s what we’ve been doing. That’s cliché, but a couple a side on a round like today, I thought at the beginning of the week if you shot 4-under each day, you’d be right there. So I think that’s the goal.”
–Jordan Spieth