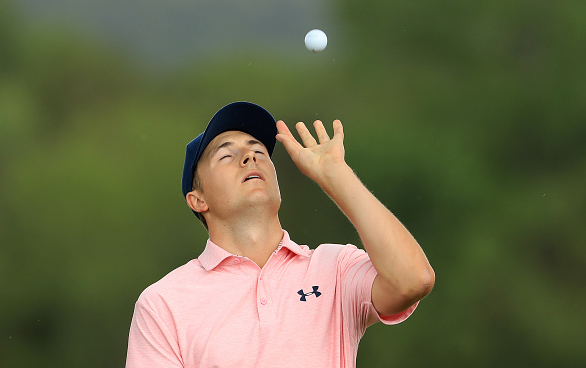 When we put together our field-preview post for the Shell Houston Open, earlier this week, we titled it ‘Stenson, Spieth Headline In Texas’. The top-5 ranked players in the field included Henrik Stenson (5), Jordan Spieth (6), Adam Scott (7), Rickie Fowler (9), and Patrick Reed (12).

Well, stunningly, four of those five big names are heading to Augusta early, as Stenson (+5), Spieth (+2), Scott (+1), and Reed (+2) all missed the cut. Only Fowler will play the weekend in Houston.

A game of inches. pic.twitter.com/6EZsBvHZsf

Betting on any one of these four missing the cut would have been a risky wager, but the odds of all four getting knocked out would’ve been off the charts. In fact Reed, Spieth and Scott all had the longest cuts-made streaks on Tour.

Most consecutive cuts made on TOUR:

It may be the biggest collective gag job by a professional sports foursome since the Atlanta Falcons defensive backfield in Super Bowl 51.

On a serious note, of the four players, Spieth has to be the most concerning, mentally. The young superstar was off to another fantastic start in 2017, including a win at Pebble Beach. But in the past two events – events he was using as tuneups for Augusta, he’s been uncharacteristically lousy, with a first-round knockout at the Dell and now a missed-cut in Houston.

Those loud screams you just heard? It was the NBC broadcast team and all the sponsors.