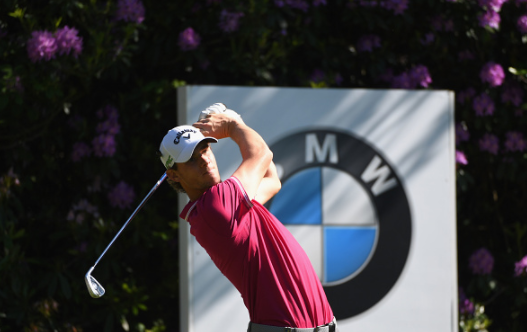 Thomas Pieters of Belgium, Italy’s Francesco Molinari, and Scotland’s Scott Jamieson are tied for the lead at the halfway point in the BMW PGA Championship at Wentworth.

Pieters, who posted a top-5 at the Masters last month, carded a 3-under 69 with one bogey against four birdies.

First round co-leader, Jamieson, got off to an ugly start (bogey-par-double) but then ripped off seven birdies over the next nine holes (4 thru 12) to get to -8. A late bogey dropped him into a tie for the lead at 7-under.

Molinari, another round-one co-leader, also had a rough start with bogeys on 3 and 5, but steadied himself and finished strong with birdies on 17 and 18 to get to 7-under.

Five players, headlined by Lee Westwood (69) and Henrik Stenson (71), round out the top-5 at 5-under, just two shots back.

Justin Rose flubs his bunker shot on the 5th, but then holes out the chip shot for par.

If at first you don't succeed… pic.twitter.com/htwlMcyiSJ

75 – Ernie Els has hit the joint-most Greens in Regulation through two days in Surrey, using his knowledge as co-course designer of the West Course.

41 – European Tour titles between the group tied on five under (Byeong Hun An, Lee Westwood, Henrik Stenson and Branden Grace).

12 – Francesco Molinari has more rounds under par than any other player over the last five years (12 out of 18).

5 – Max Kieffer has only missed a quintet of fairways so far this week. No one has hit more than his 23/28.

4 – 36-hole leads/co-leads for Pieters now, however the Belgian came from behind at the halfway stage in each of his previous three European Tour wins.

3 – 36-hole leads/co-leads, meanwhile, for Jamieson. The Scot won his only European Tour event (the 2012 Nelson Mandela) in weather-shortened 36-hole event.

4.31 – The average scores on holes number three and 15, the two hardest holes on the West Course on Friday.

Rant of the Day

Ian Poulter posted a 3-under-par 69 and made the cut after his opening-round 76. But Poulter was peeved in his presser and went on sort of a rant.

“It was absolutely shocking today. Not good enough. Unacceptable. I don’t know how many words to describe how poor I thought it was to be honest with you. It was pathetic, it really was.

The putting’s not good enough. My game’s in shape. I’ve hit 17 greens in regulation today on a tricky golf course. So I’m pleased about that.

And I’m pleased that I haven’t flown all the way across the pond to not be playing golf at the weekend, because I would be seriously pissed off if I was sitting at home this weekend. I mean, I would be not happy.

I had an old faithful putter in the bag to try to rekindle a bit of stuff, but I might snap it in half by the time I get back up to the clubhouse.

I don’t feel comfortable from 15 feet. Where I used to hole them in 2010 and 12 with infinite ease, they’re not going in like they used to.

It’s just graft and hard work. It’s finding the feeling. When they go in sometimes you just forget to write down everything that was going through your mind when it was all going in, so then you start searching. You try all the little things you’ve always tried and I’m running out of ideas. What next?

It’s really frustrating because it’s a big tournament, home fans, I’m playing well and I want to be up that leaderboard.”