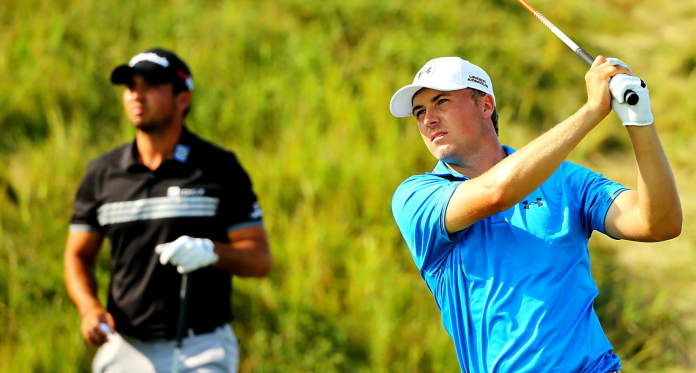 It may not have been gone long, at least compared to the off-seasons of other professional sports, but it’s back! After their annual December sabbatical, the PGA Tour returns this week for the year-opening SBS Tournament of Champions.

Held in the picturesque tropical landscape of Kapalua on the Hawaiian Island of Maui, the Tournament of Champions features a small, but extremely-talented field occupied by 32 golfers, all of whom were victorious in at least one 2016 official PGA Tour event. The strict entry requirement leaves many amazing professionals watching the tournament from a place that is almost definitely not as nice as Maui, but those who do get in enjoy an elite challenge.

The bar has been set high for new tour season, as the 2016 version was an unforgettable showcase of world-class competition and drama.

There was Danny Willett’s Masters triumph after a successful Jordan Spieth defense looked inevitable, a controversial major breakthrough for Dustin Johnson at the U.S. Open in a tournament that turned nearly the entire tour against the USGA, a duel for the ages at The Open Championship in Scotland between Henrik Stenson and Phil Mickelson, a Justin Rose gold medal in golf’s return to The Olympics after a 112-year absence, Jim Furyk’s unthinkable 58 in Connecticut, Rory McIlroy’s FedEx Cup Playoffs hot streak, and a thrilling American victory at the Ryder Cup, among many other incredible moments. How will 2017 compare? Our first look will be this week in Hawaii.

The Tournament of Champions has only been held in Hawaii since 1999, and as a result, many people do not realize it is actually a long-running event that has its origins all the way back in 1953. It was originally held in Las Vegas, before moving to Carlsbad, California, and eventually to Maui. It has been played in January since 1986, after being held in May for more than thirty years.

Past champions include Sam Snead, Jack Nicklaus, Arnold Palmer, Gary Player, Tom Watson, Phil Mickelson, and Tiger Woods. Nicklaus is the all-time tournament leader in wins with five, two more than Palmer, Watson, Gene Littler, and Stuart Appleby, who won three consecutive tournaments from 2004-06. One of its early editions even included a blowout 13-stroke victory when Gene Littler ran away with the 1955 title.

The defending champion of the SBS Tournament of Champions is Jordan Spieth. Spieth got his 2016 off to a sizzling start when a sparkling rounds 2 and 3 of 64-65 gave him a five-shot lead going into the final round.

Finishing with a 67, Spieth posted a -30 to win by eight strokes over Patrick Reed. Spieth missed Ernie Els’ tournament record by a single stroke.

From there, the tournament became Spieth’s as rounds of 64-65-67 led to an overwhelming 8-stroke triumph in what held up for the entire season as the largest margin of victory.

The dominating win was Spieth’s first tournament coming off an unbelievable 2015 season where he:

After setting the bar unbelievably high with that historically great season, winning his 2016 debut looked like it might catalyze more of the same. However, despite winning two 2016 tournaments and playing a productive role on the victorious American Ryder Cup team (2.5 points in 5 matches), his year was considered largely disappointing.

The last impression many have of Spieth’s season was the disappointment of hitting two shots in the water on #12 to blow a large lead in the final round of The Masters. He was not competitive at any of the other three majors either, which did not help the image of the state of his game. While the expectations for his season may have been unreasonably lofty, we cannot help looking back and thinking that Spieth was capable of much more. He already showed us that he was.

This will be Spieth’s first tournament appearance this season, as he took an extended break after the Ryder Cup. Expectations will again be high for the man who blitzed the Kapalua field last season, and one of the biggest questions that fans have going into 2017 is, ‘which Jordan Spieth will we see’? The unstoppable 2015 Jordan Spieth, or the good-but-not-amazing 2016 version who was far less captivating.

Since the Ryder Cup, which immediately followed the FedEx Cup playoffs, many of the PGA Tour’s star players have entered tournaments sparingly, which is not an unusual occurrence in the fall. The only two of note to not have played at all, however, are world #4 Jordan Spieth and world #1 Jason Day.

Day is coming off a successful season where, while he did not win any majors, he was still dominant in stretches and at season’s end, he was the only other player in the Player of the Year conversation with winner Dustin Johnson.

In all, the 29-year-old won three times in 2016, highlighted by his victory at The Players Championship in May. He also notched victories at two other elite-field events: the Arnold Palmer Invitational and the WGC-Dell Match Play, finished solo-2nd at the PGA Championship, and he finished in the top 10 of 50% of his tournaments (10 of 20).

Unfortunately, his 2016 season ended in disappointing fashion as a back injury forced him to withdraw during the second round of the Tour Championship.

The withdraw had to be especially difficult on Day, who was 4th in the FedEx Cup standings going into the tournament (meaning a win would have meant winning the $10 million FedEx Cup) and had shot a first-round 67. So not only is this the season debut for Day, it’s his first competitive action coming off his back injury.

Given his circumstances, he will be forgiven by fans if he doesn’t light up Kapalua, but a strong showing could signal huge things for Day in 2017.

Japanese phenom Hideki Matsuyama had a fairly good 2016 season, winning one tournament, the Waste Management Phoenix Open where he ousted Rickie Fowler in a thrilling playoff. He also posted 8 top 10s in 23 events, including a T3 at the Wyndham Championship, a T4 at the PGA Championship, and a solo-fifth at the Tour Championship.

While it was undeniably a good season, it was not quite the breakthrough that many were predicting for the ultra-talented 24-year-old. Since the finish of the 2015-16 season, however, no golfer on the planet has been hotter than Matsuyama. Internationally, he has won four of his past five events, with the non-victory being a solo-second to Justin Thomas at the CIMB Classic in Malaysia.

The last time we saw Matsuyama he was cruising to victory at the Hero World Challenge in the Bahamas, winning by two over Henrik Stenson after being ahead by a ridiculous seven strokes through three rounds. It was not likely the final round he envisioned (he shot a one-over 73), but it was enough to hold onto his massive lead.

After the way he finished 2016, expectations are now sky-high for Matsuyama, who has risen all the way to #6 in the world, making him the highest-ranked golfer without a major victory (yet). One of the things fans are going to be most interested to see in Hawaii is if Matsuyama can continue his hot streak and blow away the competition again, or if after some time off, he falls back to earth.

Regardless, it is the second appearance at Kapalua for Matsuyama, who finished T3 in 2015, after co-leading through three rounds before finishing one stroke back of Patrick Reed (who won in a playoff) and Jimmy Walker.

Ranked #3 in the world, Dustin Johnson is coming off his best professional season with three wins, which tied Jason Day for most on Tour, including his first at a major, the U.S. Open at Oakmont. He was the unsurprising choice for 2016 PGA Tour Player of the Year.

Having won at least one tournament every season since 2008, DJ has become somewhat a regular at Kapalua. He has entered the tournament four times (despite being eligible many more times), and finished in the top 10 of all four, including a win in 2013. In his last start, Johnson was T3 at the Hero World Challenge in December, an unofficial event, but one that boasted a strong field.

A hot finish to his 2015-16 season, including a win at the Wyndham Championship made him a Captain’s pick for the Ryder Cup, his first time competing in the event. Moore made the most of the selection, scoring two points in just three events, including the winning point.

Moore has competed in Kapalua three times, with a best finish of solo-10th in 2014. He has played three events in the current season, finishing in the top 25 of all three.

Reed is one of the favorites going into the week as he has finished in the top two of the past two versions of this event, including a victory in 2015. His current form is strong as well, as he won a FedEx Cup playoff event (The Barclays), and was the American star of the Ryder Cup.

Walker was the winner of the most recent major (the PGA Championship), his first career major victory. He had already won five times on Tour, but now that he knows he can win on the big stage, the 37-year-old Walker could be scary going forward.

Walker finished T10 in Kapalua last year, where he shot a nine-under 64 in the third round.

Still one of the most popular players on Tour, Watson got off to a hot start in 2016, but failed to record a top 10 between early March and late September (aside from a T8 at The Olympics, which is not a PGA Tour event).

Over that time, he went from looking like a Ryder Cup lock to missing the team entirely and settling for an assistant captainship. Watson qualified for the Tournament of Champions by winning the Northern Trust Open in late February. He has finished 10th place at Kapalua each of the past two years. He was wildly inconsistent at the Hero World Challenge in December, where he went 72-63-75-67 to finish T6.