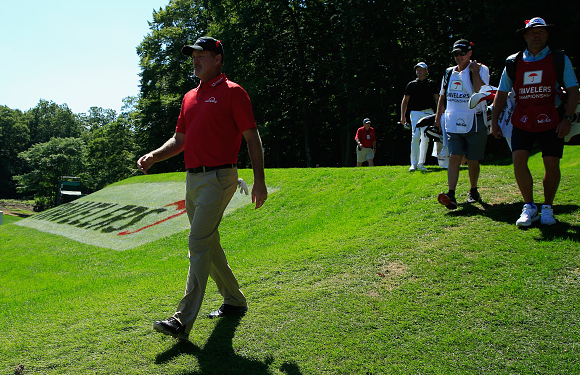 There is a four-way tie for first place after two rounds of the Travelers Championship. Tyrone Van Aswegen, Daniel Berger, Russell Henley and Marc Leishman all are at 7-under par.

One back at 6-under is a group of four, including Jerry Kelly.

Here’s a round up of quotes and photos from some of the notable players, following round number two.

“Yeah, played really solid. I don’t think I made a bogey, so I’m just hitting it nicely and making a lot of putts. That’s always a difference maker. When you’re seeing the lines with good speed they tend to go in a lot. I feel like my swing coach this week, Robert Baker, he’s helped me a lot just getting a little bit more in the slot. I’m holing a lot of putts. It’s a good combination. Hopefully I can keep rolling it.”
-Tyrone Van Aswegen, 1st at -7

“I played really good. I was not expecting the wind to blow like it did. I came out here early in the morning and hit some putts and it was dead calm and it kind of picked up from nowhere, but I feel like I handled it pretty well. I was trying to hit what I call my bullet shot. It’s kind of my go-to shot. It’s one of those shots that I hit under pressure. I just know where it’s going to go, and that’s what I went with there. I’m not searching for my first win anymore, so I’m a lot more comfortable where I’m at. If I just do the right things and hang in there, I’ll have chance to be there again on the weekend.”
-Daniel Berger, T1 at -7

“I hit the ball very bad. I didn’t hit it very well at all. Once I got the short irons in my hand I hit the ball well. So I kind of figured it out in my head on the last hole, but it was one drive too late unfortunately. Couldn’t even fly it 260 over that right bunker. Had to layup. Legs weren’t under me today as well as they were yesterday. Had a real solid base and I was able to swing my club around me. Today I was whipping it all over the place. That’s what I’ve done my whole career. I just got to have another couple low ones.”
-Jerry Kelly, T3 at -6

“I thought the round was nice. You know, again, if those swings — when I say those swings, I mean it didn’t cut. If it cuts ten feet on both of those swings on 12 and 13 we’re in the fairway. We’re in the fairway and hopefully we wouldn’t make bogeys. In the par-5 we would have a chance to make a 4. There are two shots right there. If it had been on any other hole, be a different story. Might not have been bogeys. So I was just playing steady golf. Then 15 I drove it. I flew it pin high give or take right there. Bounced over the green, and the grass going up got me. I thought I hit a hard putt; it came back down and made a quick bogey there. Again, one of those things. If it had got through the rough and up through the green, there are three shots I could have saved. So I don’t see it as a bad round of golf. I just see it as the score wasn’t what I wanted. But it’s still — I’m not out of it. I don’t know what the guys are going to do this afternoon. Last time I checked, because I been playing golf for five hours, it was supposed to be bad weather tomorrow and tougher conditions. I’m not far out of it..”
-Bubba Watson, T23 at -3

“A little bit better. Felt like I had a little bit more control on distance today and really felt like I hit the ball a lot more solid today. Only really one or two golf shots I felt like were probably poor. Besides that, felt like it was solid. Need to make a couple more putts. Seemed like today I had more opportunities and was kind of burning edges. Couldn’t get them to fall. Yesterday everything was going forever. A little cooler this morning, so I was like, so just play off yesterday’s numbers basically. Seemed to work.”
-Patrick Reed, T23 at -3