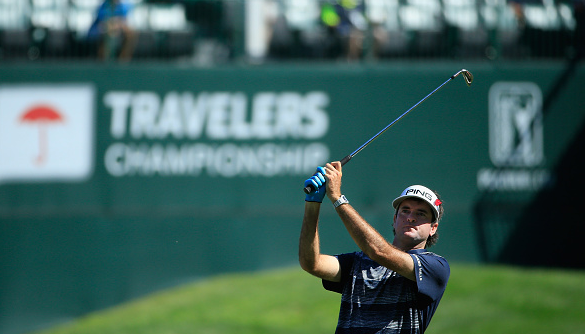 Bubba Watson shot an even-par 70 today at TPC River Highlands during round two of the Travelers Championship.

The two-time winner at the Travelers, and defending champ, took answers from the press following his round.

Here’s a roundup of the questions.

PRESS: What’s it like to be out there hearing the USA chant almost every day?
BUBBA WATSON: The only thing I can compare it to is Presidents Cup or Rogers Cup. What an honor knowing how close we are to getting to Rio, how close we are to being what we call Olympians. For golfers to be called Olympians, what a thrill, what a privilege, what an honor.

Again, like I’ve said before, who cares about score. Let’s look at what we’ve done and accomplished in our sport to get it into the Olympics.

PRESS: It’s so cool, because it hasn’t happened for a century, and you’re one of the people forging that path. Does it send a chill up your spine when you step on the tee?
BUBBA WATSON: It will for sure.

PRESS: Even here?
BUBBA WATSON: Yeah, when you hear the reaction. You know Patrick used the bag; Matt used some of the clothes. No, we all get excited. We talked about it and all made reference to it.

We’re trying to compete here. Don’t get me wrong.

We’re trying to win Travelers first. We would love to take a trophy with us down there. No, it’s going to a thrill of a lifetime just to say that. It’s going to take four years for the next group of guys to have that chance to do it again.

No matter what, I can say I did it once.

PRESS: In a tribute to your focus here, you fought back from being two over today.
BUBBA WATSON: Yeah, for sure. I didn’t hit bad swings on 12 and 13, but one went in the lip of a bunker and one went in the water.

Then a goofy — I wouldn’t say goofy. Goofy on my part. The hole. Great hole location and everything on 15 and. I made a quick bogey with a couple bad putts.

So, I mean, it was a good day. I knew just keep doing what I was doing, and then I made late birdie to move up a little bit.

There are two shots right there. If it had been on any other hole, be a different story. Might not have been bogeys. So I was just playing steady golf. Then 15 I drove it. I flew it pin high give or take right there. Bounced over the green, and the grass going up got me. I thought I hit a hard putt; it came back down and made a quick bogey there.

Again, one of those things. If it had got through the rough and up through the green, there are three shots I could have saved. So I don’t see it as a bad round of golf. I just see it as the score wasn’t what I wanted. But it’s still — I’m not out of it. I don’t know what the guys are going to do this afternoon.

Last time I checked, because I been playing golf for five hours, it was supposed to be bad weather tomorrow and tougher conditions. I’m not far out of it.

On Skipping Opening Ceremony of Olympics to Defend at Travelers

PRESS: Tonight, opening ceremonies, but also the benefit dinner. Talk about both of those subjects.
BUBBA WATSON: Obviously it would’ve been a thrill of a lifetime to be at the opening ceremonies, but being defending champ, knowing this course as well as I do, why would I not come here and try to first defend and do my duties that I should do as a past champion here, and then try to win a golf tournament here?

They’re one of the best, if not “the” best sponsor we have because of the fact that they’re looking at everything besides golf, how they can improve it, from fans to families to kids to the charities they impact.

And then tonight, you know, the money they raise, it’s a big deal, especially with Jay and his situation. We can learn so much from that man, and we have over the years. And I have getting to know him over the last few years.

Sad story, but like the pins say on our hats, Carry on. He understand that we got to press forward. What a thrill, celebration and a thrill to be a part of a great charity organization like that.

PRESS: I know there are no Ryder Cup points available, but do you look at that as another opportunity to make a statement to being on the team?
BUBBA WATSON: I mean, you know, I don’t. I don’t. Obviously if you win a gold medal it’s going to have some influence that you’re playing well.

But at the same time, no, because a guy that’s playing well at – I think the next tournament is the John Deere. So a guy that wins John Deere or a gold medal, he got the points.

I can’t help it if he went from whatever place to eighth. You know what I’m saying? That means eighth went to ninth. That’s gold medal, yes, it’ll have some influence. It’s winning a golf tournament.

But at the same time, no, I haven’t thought about it. I would just love to — I want to be able to compete all four days, no injuries, so I can say I was a true Olympian and competed every round.

Then if I could hold some kind of hardware, what a of thrill and an honor.

PRESS: I know you want to make the Ryder Cup team on points, but…
BUBBA WATSON: I would take a pick. So if Davis is watching or listening, I will take a pick.

PRESS: Are you comfortable with the fact you got two major championships, been on the teams before? You at least have comfort in knowing that you have a resume in case you don’t get in on points?
BUBBA WATSON: Um, hopefully they don’t listen to media and they actually like me. You know, no. I mean, being a veteran — it’s weird to say that now, but so many teams I’ve played on.

I don’t know if you remember, but I’ve won this year. I have done some good things. It’s always a chance you don’t make it. That’s why you would rather make it on points. Nobody wants to go for a pick. Unless he calls me and says, Hey, you’re in, then I’m not worried.