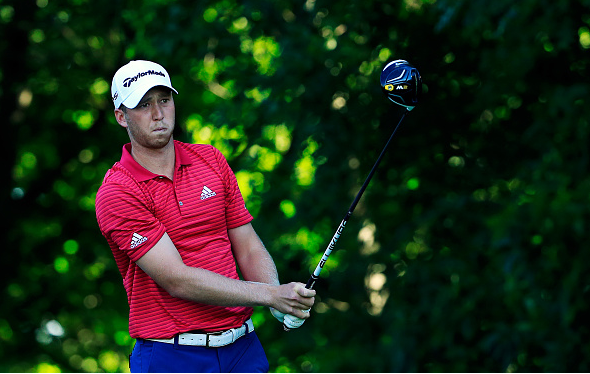 With the 2016 Olympics set to kick off in Rio tonight, it is appropriate that the four-way tie atop the Travelers Championship leaderboard is held by players from three different countries.

How the Leaders Got Here

Van Aswegen has zero bogeys through two rounds. Berger, coming back from an injury, was phenomenal from tee-to-green in round two. Last time Berger held a 36-hole lead (FedEx St. Jude) he won. Henley made a big move with a 5-under 65, while Leishman birdied his last hole to get in on the first-place action.

The best round of the day was a six-under 64 by Blayne Barber. It was a tremendous round for the man who would be first out of the Fed Ex Cup playoffs (126th place) if they were starting today. Barber shot -3 on both nines and kept his card bogey-free. English golfer Tyrrell Hatton has been on fire the past month, with two top-10s in majors and a T2 at the Scottish Open. This is the first career tournament for Hatton on American soil in a non-major. He disappointed with a 71 in the first round, but had the course figured out today, shooting a five-under 65.

First round co-leader Andrew Loupe was unable to keep the magic going for a second round. An early triple-bogey derailed an otherwise strong front nine, and then he went in at 6-over, putting him at E for the tournament, one below the cut line. This is his seventh consecutive missed cut. Ireland’s Shane Lowry, who has been in a funk since that 65 in round 3 of the U.S. Open, shot a 1-over to miss his third consecutive cut.

The three American Olympians in the field, Bubba Watson, Patrick Reed, and Matt Kuchar were in the same pairing for the second consecutive day, and for the second consecutive day, the trio played well. Watson, who is also the defending champion, shot a round of even-par 70, to make it to the weekend at 3-under, which ties him for 24th place. Reed and Kuchar were both better today, with matching rounds of 3-under par 67. For the tournament, Reed is tied with Watson at 3-under, while Kuchar is one stroke ahead, good for T15.

Not What He Envisioned

Colombian Camilo Villegas passed on the opportunity to represent his country at the Olympics, because he felt it was more important to move up in the FedEx Cup standings and secure a card for next year. He shot a 4-over 74, one day after a dismal round of 7-over 77, and will be home for the weekend. At 11-over par, Villegas is in 154th place out of 156 golfers, finishing ahead of only the reeling Steven Bowditch and the golfer formerly known as Heath Slocum, who has missed 16 of his last 19 cuts. Through two rounds, Villegas had five holes of double-bogey or worse, the most of anyone in the field.

“I was just trying to hit what I call my bullet shot. It’s kind of my go-to shot; it’s one of those shots I hit under pressure, and I just know where it’s going to go, and that’s what I went with.” ~ Daniel Berger, responding to a comment about an impressive drive on 15, hitting what analysts compared to an off-speed pitch in baseball

“I’m a beast, man! I’m not tired, I’m ready to go! This is my life; I love every minute of it! Ive taken some weeks off, you have to; it’s grueling, but I’ve waited my whole life to do this, I’m ready to roll!” ~ Russell Knox emphatically speaking about the role pacing and fatigue has played during a very busy summer.