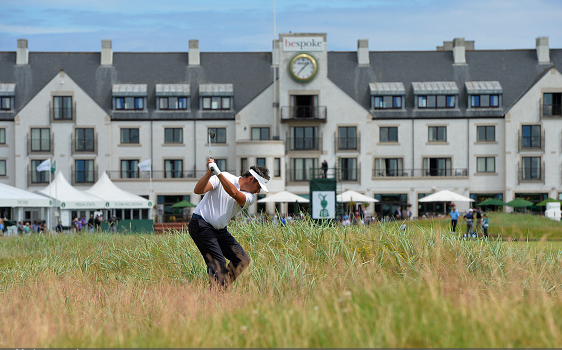 Jean Van de Velde made his much anticipated return to Carnoustie this morning at the Senior Open Championship.

It’s Van de Velde’s first time back at Carnoustie since 1999, where he infamously blew a three-shot lead on the final hole.

And the golf gods were not kind to the semi-retired Frenchman – as he opened with an 11-over-par 83.

Van de Velde’s meltdown in ’99 is one of the most memorable blown leads in golf history due to his bizarre decision making on the hole.

To recap: Van de Velde needed only to make a double-bogey 6 to win the Claret Jug. He took a driver off the tee and got lucky not to put it into the burn. But instead of playing a wedge to leave it short of the burn, the Frenchman chose to go for the green. His shot went right and he got a terrible bounce off the grandstand which put him 50 yards short of the green in thick rough.

Van de Velde then put his next shot in the burn and took a drop, but not before he took off his socks and shoes and nearly played it out of the water. He would make 7 on the hole and eventually lose in a playoff to Paul Lawrie, but it was the poor decision making, not the shots, that doomed him.

“I am at peace with what happened. I have been for a very long time,” he said. “You know, it did take me a few days to find my sleep again after that Sunday, due to the stress, the adrenaline, the rush, trying to analyse it or whatever. But after that, I have never once woken up in a cold sweat and it has never given me difficulty finding sleep. Ever.”

As for this year, the expectations aren’t very high. Van de Velde stopped playing in 2011 and has only played casually “15-20 times” a year. He made his Champions Tour debut at the Dick’s Sporting Goods Open a few weeks ago, where he tied for 73rd.

His chances of pulling off a miracle at Carnoustie this week are all but gone after opening with 83, but it’s nice to see Van de Velde playing again, at peace with a moment that would have likely tormented most players for their entire life.

ICYMI: Hungover Eddie Pepperell Shoots 67 on Sunday at The Open