Justin Thomas shot a final round 3-under 68 at Quail Hollow to finish at 8-under and a two shot victory at the 99th PGA Championship. It is the 24 year old’s first major championship. 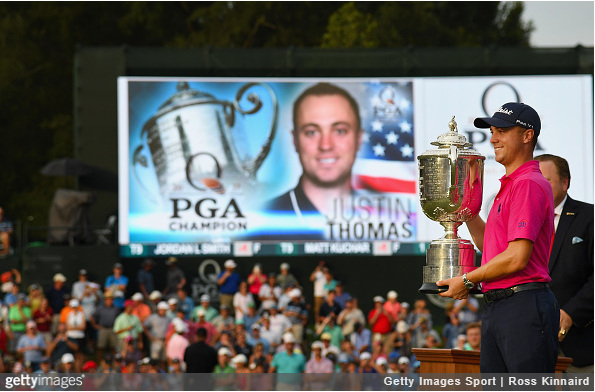 Thomas finished his historic round in Charlotte with six birdies and three bogeys, including two of them over the first three holes.

As the highlight package notes, the birdie on No. 9 was the turning point, while the cliffhanger on 10 is the viral one.

But the birdie on No. 17 will go down as his most clutch. Holding on to a two shot lead at the time, Thomas absolutely laser beamed it and made a terrific 12 footer for birdie to pad his lead to three with one to play.

With a fourth win on the season, Thomas presumably moves into the front-runner’s position for player of the year honors.

Thomas joins Jack Nicklaus, Tiger Woods, and Rory McIlroy as the only players to win a PGA by the age of 24.