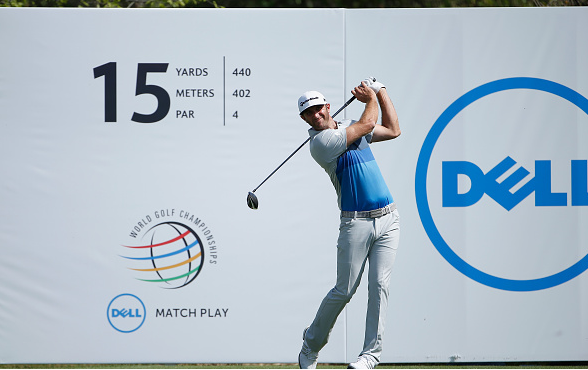 If the month of March has taught us one unassailable truth, it’s this: everything is better with brackets. While many are tearing their NCAA basketball brackets to shreds (most of them while cursing Villanova and/or Duke), the third week of the month brings about professional sports’ second most popular bracket tournament: the World Golf Championships (WGC) – Dell Technologies Match Play.

Featuring 64 of the world’s best golfers (the entire field is ranked inside the world’s top 70), the Match Play is composed of five jam-packed days of elite-level match play golf.

Held in Austin, Texas, the tournament offers dramatic showdowns, exciting storylines, and maybe best of all – a chance at redemption for those who foolishly had SMU making it to the NCAA Men’s Championship Game. Not that we’re referring to anyone in particular. Nobody is THAT stupid.

While match play tournaments have been held for a long time on the PGA Tour, even outside of the Ryder and President’s Cups, the WGC-Match Play as we know it today kicked off in 1999, the same year the World Golf Championships started, making it an original WGC event.

The inaugural WGC-Match Play event in 1999 was won by Jeff Maggert, a 6 seed in his region, who impressively knocked off the gauntlet of Fred Funk, Nick Price, Bernhard Langer, Tiger Woods, and Steve Pate, before outdueling Andrew Magee in a marathon final that needed 38 holes (the 36-hole final plus two sudden-death holes) to complete.

In its 16 previous editions, the tournament has produced one three-time champion (Tiger Woods), and a pair of two-time winners (Geoff Ogilvy, Jason Day). Tiger had perhaps the most impressive victory in tournament history, when he obliterated Stewart Cink 8&7 in the 2008 Finals.

The defending champion of the WGC-Dell Technologies Match Play is Jason Day. As two-time winner at the Dell Match Play, Day was undefeated in pool-play, going 3-0-0 against Thongchai Jaidee, Graeme McDowell, and Paul Casey.

He was the #2 seed in the final 16 bracket (Jordan Spieth was #1), where he went on to defeat Brandt Snedeker and Brooks Koepka in the first two rounds before a one-up triumph over Rory McIlroy in the semifinals, and then crushing Louis Oosthuizen 5&4 in the championship match.

The top 64 players in the Official World Golf Rankings as of 3/17 were invited to the WGC-Match Play. Several withdrew, and they were replaced by the next highest ranked available players.

At various times in the early part of this 2016-17 PGA Tour season, we have raved about the hot streaks put together by Hideki Matsuyama, then Justin Thomas, and then Jordan Spieth. All three are tremendous players who have earned their positions in the world’s top 10.

Now that all the best players have come back to regular play, the cream has risen to the top, and in this case, the “cream” is 2016 PGA Tour Player of the Year Dustin Johnson.

After wins at his last two events, the Genesis Open, which elevated him to world #1 for the first time, and the WGC-Mexico Championship, DJ is again, THE talk of the golf world. He was able to validate his #1 position in Mexico, and now everyone is wondering if he can do it again in Austin.

If Dustin is going to make it three of his last three, he is going to need to overcome a surprisingly average career singles 11-10 match-play record.

Breaking it down further, he is 7-9 in the WGC-Match Play, 1-1 in the President’s Cup, and 3-0 in the Ryder Cup. That being said, while a 52.4% career winning percentage is nothing special, it is a little misleading. Johnson used to struggle badly in the WGC-Match Play, failing to advance past the first round in his first four tries against Steve Stricker (2009), Camilo Villegas (2010), and Mark Wilson (2011 and 2012) respectively.

Since 2013, he is 7-5 in the event, including 4-2 in his last six matches. Also, the 3-0 singles record at the Ryder Cup shows that he can stare down the best in match play formats. The stage doesn’t get any bigger than the Ryder Cup.

DJ played well in the most recent version of this event, going 2-1-0 in pool play, with wins over Kiradech Aphibarnrat and Jimmy Walker, while losing to Robert Streb. He would then defeat Patrick Reed 3&2, before being taken out 2&1 in the quarterfinals to Louis Oosthuizen. Officially, it went down as a T5, easily his best finish in the event.

Defending champion Jason Day put together an inspiring performance in Austin last year, going unbeaten for the week, and demolishing Louis Oosthuizen 5&4 in the championship match. It was especially impressive when considering that Day nearly withdrew early on with back trouble. The win elevated him to world #1, a spot he held until recently.

The 2016 win in Austin was not Day’s only win in the WGC-Match Play. He also won the 2014 Match Play, the final year of the straight bracket single-elimination format.

A two-seed in his region, Day eliminated Thorborn Olesen, Billy Horschel, George Coetzee, and Louis Oosthuizen, before knocking out Rickie Fowler in the final four, and then winning an epic 23-hole match against Victor Dubuisson for the title.

His career match-play record of 22-8 (21-7 in the WGC-Match Play, 1-1 in the President’s Cup) establishes Day as the king of the head-to-head format.

As phenomenal as Day has been in this tournament, however, his recent form may be cause for concern. Since his return to play from a back injury, which forced him to withdraw from the 2016 Tour Championship, Day’s play has been a mixed bag.

He played decently in his first tournament back (T12 in a 32-man field), and when he posted a second-round 64 at the AT&T Pebble Beach Pro, it was believed that all the rust from his absence had been shaken off.

Aside from those though, he has struggled in the new season. He followed that 64 at Pebble with a third round 75, missed the cut at the Farmer’s Insurance Open, and finished just T64 at the Genesis Open.

In this past weekend’s Arnold Palmer Invitational, Day was a non-story shooting 70-71-75-70, good for a share of 23rd place. He will be as feared as anyone in Austin, but he will need to do much better than he has so far in 2017.

3. What About the American Ryder Cup Star?

At the 2016 Ryder Cup, Patrick Reed was unquestionably the MVP of the winning American side, going 3-1-1 to earn 3.5 points, the most of anyone on the team. In his Sunday single’s match, he had the two unenviable tasks of going out first and facing Rory McIlroy. Reed proved up for the task, defeating McIlroy 1-up.

He has also played well at the WGC-Match Play, getting past the first round in all three appearances. Last year, he went 3-0-0 in match play, despite drawing a difficult group comprised of Phil Mickelson, Matthew Fitzpatrick, and Daniel Berger. He would go on to fall in the round of 16, losing 3&2 to Dustin Johnson.

For his career, Reed is an impressive 10-5-1 in singles head-to-head matches. All that would lead most to believe that Reed is among the favorites to take the WGC-Match Play this year. While it would not be surprising if he is in the winner’s circle on Sunday, he will have to do it in spite of mediocre recent play.

Reed has just one top-10 this season in nine events, one season after finishing second on tour with 11 top 10s. In his past five tournaments, he has finished T68, T23, T59, T61, and T38, respectively. The T61 was at the most recent WGC event (a 77-man field), the WGC-Mexico, where he finished six shots over par.

At #3 in the world, McIlroy is the highest ranked European in the field, and a former winner of this tournament, taking the 2015 title by going undefeated in pool play before taking down Hideki Matsuyama, Paul Casey, Jim Furyk, and finally Gary Woodland in bracket play.

Rory got off to a torrid 68-65 at last month’s WGC-Mexico, eventually settling for a T7. He got off to a poor start in last week’s Arnold Palmer Invitational, posting a first round 74, but was tremendous on the weekend, shooting a tournament low 65 on Saturday, and then a 69 on Sunday. He even held the lead at one point on the back nine, before a final-hole bogey dropped him to T4.

He has not been a paradigm of consistency as of late, but he at least appears to be over the rib injury that kept him sidelined earlier in the year.

Spieth was the #1 overall seed in last year’s WGC-Match Play, and looked the part early on, going 3-0-0 in pool play. He was eliminated in the Round of 16 by the Louis Oosthuizen buzzsaw and finished T9. He also made it to the 4th round in the 2014 version, his first try at this event.

His recent form has been tremendous: he already has three finishes inside the top-3 in 2017. An additional factor in Spieth’s favor: he is a native Texan and will likely draw as much crowd support as anyone in the field.

Hatton, who plays most in Europe, is a rising star in golf and currently sits at #14 in the world. He finished in the top-10 of both 2016 majors he entered: a T5 at the Open Championship and a T10 at the PGA Championship. He has also finished in the top 10 of his last three PGA Tour events (two T4s and a solo-10th), all within the past month.

This will be his first attempt at the WGC-Match Play, although he has performed well in head-to-head before, finishing T5 at the 2015 Saltire Energy Paul Lawrie Match Play in Europe.

Before Jason Day’s recent explosion in this format, Kuchar was the king of match play. When he won the 2013 WGC-Match Play, taking out Day in the semifinals, Kuchar’s career record in the event was an incredible 15-3.

He is just 5-5 since, but did notch victories over Anirban Lahiri and Justin Rose in 2016, reaching the Round of 16 where he was knocked off 1-up by Brooks Koepka.

The 38-year-old has been quiet so far in 2017, as a T9 at the Waste Management Phoenix Open has been his only top-10 finish.

Mickelson played six PGA events in a seven-week span from late January to early March, capped off by a T7 at the WGC-Mexico. He has taken a well-earned break over the past two weeks and should be fresh in Austin.

Mickelson is as familiar with match play as anyone in the field, having competed on 11 American Ryder Cup teams. Even at 46, he’s a formidable opponent, and between Ryder Cups, President’s Cups, and WGC-Match Plays, Phil has amassed singles match-play 26 victories.

At this event last year, he went 2-1-0 in match play, defeating Daniel Berger and Matthew Fitzpatrick, but lost badly to Patrick Reed and failed to make the round of 16.