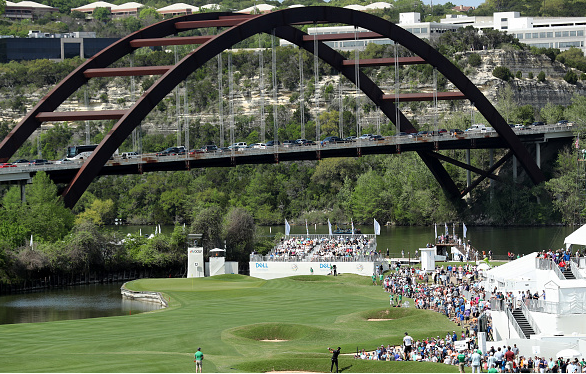 Pool play has been completed at the WGC-Dell Technologies Match Play in Austin, and the 16-player bracket is something that very few predicted. World #1 Dustin Johnson (1) moved on, to nobody’s surprise, but the only other player seeded in the top 10 to make the round of 16 was little-known Alex Noren (8) of Sweden. \

Five groups had to go to a playoff on Friday to be decided, and the winners of the 16 groups are set to tee off on Saturday in a single-elimination show-down.

Moving Onto the Round of 16

For the third straight day, Phil Mickelson absolutely dominated his opponent, whipping J.B. Holmes 6&5. With the runaway win over Holmes, and the wins of 5&3 and 5&4 on Wednesday and Thursday, it defies belief that Mickelson is going to the round of 16 for the just first time in 13 years.

As he did in his first two matches, Mickelson got off to a hot start, winning the first three holes. He will face Arnold Palmer Invitational Champion Marc Leishman on Saturday.

The most anticipated match of the day, Spaniard legend Sergio Garcia versus Probably Future Spaniard legend Jon Rahm in a winner-take-all affair, was not the nailbiter it was expected to be. Rahm went on an early back nine tear and left Sergio in the dust, taking the match 6&4, and clinching a spot in the round of 16 in his first try.

Sergio played well enough early on to keep it close; he had just a one hole deficit after 8 holes, but once Rahm was feeling it, Sergio was finished. Rahm birdied 9, 10, 12, and 13, and needed nothing more. Rahm will face Charles Howell III next, in the round of 16.

Yes, Dustin Johnson is very, very good. Nobody would be favored to beat him right now. That being said, a player of Walker’s caliber, the most recent man in golf to win a major championship, has no excuse for going six down through seven holes against anyone.

Walker won back a few of those holes on the back nine, but by then, DJ was in prevent defense mode, ultimately winning 5&3. Walker went 1-2-0 for the week, while DJ won all three of his matches definitively.

Matsuyama may have multiple wins on the season, and elevated himself to world #4, but he looked nowhere near the part on Friday, getting crushed 6&4 by Louis Oosthuizen (23). Matsuyama won the first hole, but Oosthuizen dominated after that, taking #2, #3, and #4 and never letting up.

Hideki ended up a disappointing 0-2-1 in pool play, a surprise for a player who has been great in stroke play playoffs.

One of the lowest seeded players in the field, Howell III had a big task in front of him, trying to find a way through a brutal group that included Tyrell Hatton (10) and Rafa Cabrera-Bello (22), who have both been phenomenal in the U.S. and Europe over the past year.

Howell III did what he had to on Friday, winning 2&1 against Jeunghun Wang, and then staring down Cabrera-Bello in a five-hole playoff to take the group with a 2-1-0 record. Hatton was also involved in that playoff, but was eliminated after a careless mistake led to a two-shot penalty on the first hole.

Things will not be much easier for Howell III tomorrow; he is the unlucky player who drew Jon Rahm in the round of 16.

Fisher looked like one of the best in the world at his peak in 2009, but later went into a big multi-year slump that dropped him to #100 in the world rankings. Since then, he has slowly worked his way back up, mostly in Europe, and as of the past two years has at least made it back to the point where he was qualifying for majors and WGC events.

Fisher took another big step forward on Friday, first knocking off Jim Furyk (51) 4&2 in a match where he held the lead after every hole. Then faced with the unenviable task of competing against 2016 Match Play runner-up Louis Oosthuizen (23) in a playoff. Fisher won with a birdie on just the second playoff hole, taking the match and the group. He will face an upstart Bubba Watson on Saturday in the round of 16.