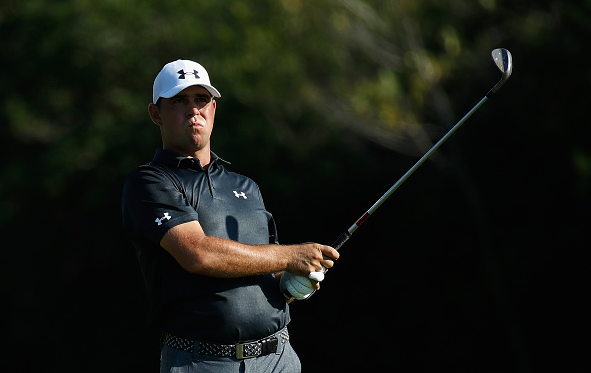 Gary Woodland, the 32-year-old Kansas native, has had a consistent presence on PGA Tour leaderboards the past few years, but has not left a tournament with the biggest payday since the 2013 Reno-Tahoe Open, kind of a gimmicky tournament with different scoring, where Woodland won with a score of +44.

Woodland is one step closer to his third career victory after he shot a five-under 66 to get to -18 and lead alone after three rounds at the OHL Classic at Mayakoba (Mexico). Woodland holds a one-shot lead over Pat Perez, who had the low round of the day (and tournament), a 9-under 62.

It does not get more consistent than that. Unfortunately, the anesthetically appealing around lost some luster when Woodland double-bogeyed the par-3 15th hole, his first hole worse than par in his past 38 holes, but for the second straight round, Woodland holds the lead on his own, as he was able to hold off the fast-charging Pat Perez.

Pat Perez came out in round 3 looking like he was shot out of a cannon, with five birdies and an eagle on his first nine holes. After playing the back nine at 2-under, Perez carded a nine-under 62: the lowest round of the tournament.

The 40-year-old Arizona State product (who isn’t?) hit 11 of 14 fairways, and had only one bogey on the round. Perez is coming off a T7 at the Shriners Hospitals for Children Open, and is showing his regular form for the first time in two years.

For the second tournament in a row, Chez Reavie had one very low round to get on the leaderboard.

Last week in Vegas he had 10-under 61 in the second round. This week it was an 8-under 63 in the third. Reavie was bogey-free, and is now in a tie for 6th going into Sunday.

There were not many high scores posted on Saturday, but there were a few players unhappy with their round 3 result.

Carrying the hopes of Canada on his shoulders, Adam Hadwin’s one-under 70 was the worst round 3 score of anyone who is currently in the top 30. With two bogeys on the back nine, Hadwin is now T20 where he finds himself eight strokes behind Woodland.

Tied with Hadwin, Steve Marino played himself into contention on Friday with a seven-under 64, but came back to earth on Saturday with a two-under 69.

Chris Kirk was the first round leader after an opening 63, but was just one-under on Friday, and he needed better than the three-under 68 he shot today to get close to the lead. He is currently six strokes back in a tie for 10th.

Web.com Tour grad Seamus Power was an unknown in the United States until he had a respectable showing (T15) as one of Ireland’s two representatives at The Olympics in Rio.

With a bogey-free 64, he is now in solo-fourth place and in Sunday contention for the first time in his young PGA Tour career.

He shot the 64 in spite of hitting less fairways that he has in any other round this week, and tied with the least amount of greens he has hit. He will be in the second-to-last group tomorrow with U.S. Open runner-up Scott Piercy.

One of the very few over-par scores of the day came from Mexican native Abraham Ancer, who made a mess of his par-5s today, and struggled to a three-over 74.

Among the Mexican golfers in the field, Ancer was the leader going into round 3, but is now two strokes back of Oscar Fraustro, who is in a tie for 32nd place at -8.

The only other Mexican to make the cut was Carlos Ortiz who plummeted down the board today after a four-over 75, the worst round in the field on Saturday. Ortiz had seven bogeys on his round, with all seven coming on par-4s.