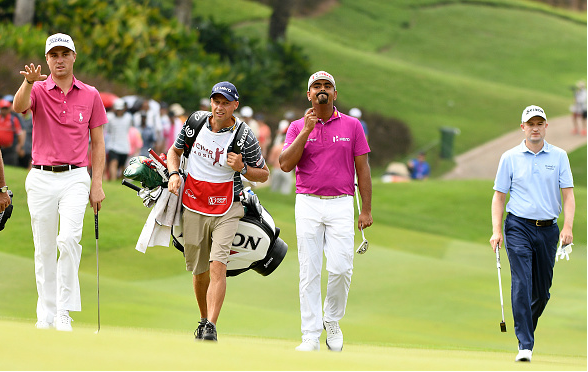 Justin Thomas won back to back at the CIMB Classic by carding 13 birdies over his final 23 holes. It was the second PGA Tour title for the 23 year-old star from Kentucky.

After his victory, Thomas talked about all the usual things like his round, the win, and what it means to his career.

The Alabama University alum also discussed important issues such as his matching pink outfits with playing partner Anirban Lahiri, his addiction to Alabama football, and his excitement about getting back to Kapalua for the Tournament of Champions event.

PRESS: You had an early wake-up call this morning. Tell us a bit about that.

THOMAS: Yeah, the Alabama game kicked off at 3:30 our time. Woke up at about 4:00 and got the computer and streamed it and just laid in bed and watched it and probably woke up a couple people in the rooms next to me. But was very pleased with our performance and it was definitely a good start today. I don’t know how today would have gone if they had lost.

PRESS: Did you Facetime with someone at the game?

THOMAS: Yeah, a couple buddies, the rammer jammer, the song we sing after we win, they face timed so I could sing it with them. Those guys are probably having a pretty good time right now. It’s maybe 2:30 in the morning or something there. Thank them for helping me out this morning.

PRESS: Your playing partner, Lahiri, did you guys call each other, plan the outfits today?

THOMAS: Well, we actually did it twice. On Friday I wore pink pants and he wore pink pants, too. We obviously both have great style; I think that’s what it is.

THOMAS: I’m so excited to get back to Kapalua, I really am. It maybe is the most fun tournament I’ve ever played in because it’s obviously a huge tournament, all the winners for the whole year.

But to start the year in Hawaii is usually very fun. It means that you’ve done something great the previous year, whatever it was, to win. It’s a fun course and it will give me a lit of motivation, for sure, to practice this off-season to play well there. But it’s a fun, relaxing week. I’m sure my parents are just as excited as I am.

PRESS: Second win now, how does that change your goals going forward?

THOMAS: I’m just so excited; I get to go back to Kapalua. I love it there. I’m so excited. Hardest part was trying not to think about that those last couple holes.