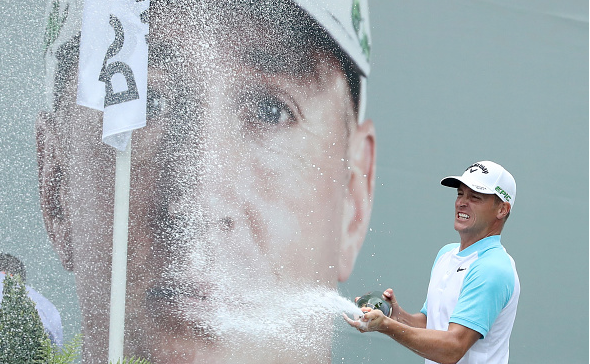 Alex Noren entered the final round at the BMW PGA Championship tied for 20th, seven strokes behind leader Andrew Dodt of Australia, and with 17 other world-class professional golfers between him and the leader.

But after shooting a course-record 10-under 62 on Sunday, highlighted by an eagle on the 18th, the 34-year-old Swede beat them all, and captured the BMW PGA.

At the halfway point, with Noren in the clubhouse at 11-under, Dodt, Henrik Stenson, Shane Lowry, Hideto Tanihara, and Branden Grace were in a five-way tie at 9 under, and the odds seemed high that one would be able to at least force a playoff. But all five faded down the stretch, leaving Noren with a full two stroke cushion.

Italy’s Francesco Molinari birdied the final two holes to finish solo-second at 9-under, a shot ahead of Stenson, Tanihara and Nicolas Colsaerts, who also eagled the 18th to jump into the top-5.

It was Noren’s fifth European Tour title in the last 11 months.

The Oklahoma State product seems to be fully healed from debilitating wrist injuries which impacted big chunks of his career between 2012 and 2014. During this time, Noren’s world golf ranking plummeted.

But since his win at the Scottish Open last July, Noren has been one of the very best golfers in the world. He will be leaving Wentworth tonight ranked inside the top-10.

? Leader in the clubhouse pic.twitter.com/30xfHY6mgv

“It feels very amazing and very crazy, because I had no intention of trying to win this morning. You know, I didn’t even think about it, and I came off the course quite angry yesterday of playing a good round, 2-under, and then kind of chipping into the water from the back of the green on 18. So it’s a great feeling now, but it feels unreal, yeah.”
–Alex Noren, 2017 BMW PGA Champion