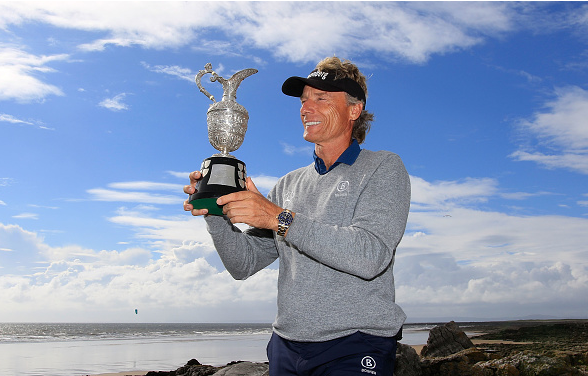 Bernhard Langer shot a 1-over 72 on Sunday at Royal Porthcawl Golf Club, and became the most successful golfer in senior major championship history, capturing his third Senior Open Championship.

Langer, the wire-to-wire leader, finished at 4-under 280 for the tournament, three shots clear Corey Pavin (71), who finished solo-runner-up at 1-under 283.

“It didn’t look very promising early on. But, despite my first tee shot and my sickness, I actually had a very good first round and had the lead of the Championship, and I think that was the key,” said Langer, who captured three of the five Champions Tour’s majors in 2017. “I led from the very beginning. I led on Thursday, I was co-leader Friday and then jumped into the lead with a 65 yesterday and never surrendered.”

The 59-year-old German, who won The Senior Open in 2010 and 2014, now owns 10 senior major titles, and joins Gary Player and Tom Watson as the only three-time winners of the Senior Claret Jug.

“We know what great players Tom Watson and Gary Player are, especially as Tom has maybe the best links course record of anybody,” commented Langer. “He’s one of the best wind players that I’ve seen, maybe the best; and we all know what Gary has achieved in his career. I’m very honoured to be mentioned with those two.”

“I’m looking forward to Carnoustie and St Andrews,” said Langer. “That will be a couple of very special weeks for me next year. St Andrews is one of my most favourite places; the golf course has really grown on me. It’s a fantastic place to play golf and there’s so much history there.”

“It’s a fantastic feeling to have won here again. There might have been a little extra pressure, just knowing that I won here by 13 a few years ago. I hit my first tee shot straight into a gorse bush on the left and it was unplayable so, looking back now, it ended a lot better than it started.”
–Bernhard Langer, 2017 Senior Open champion