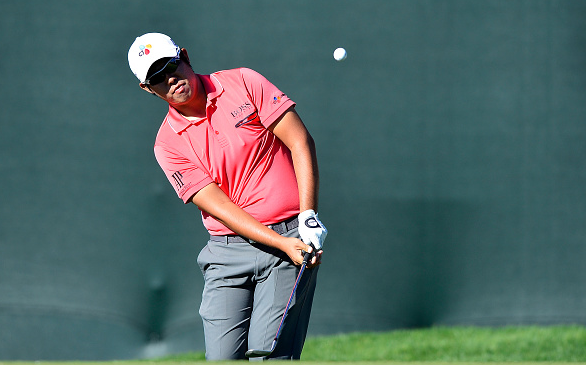 Byeong-Hun An shot a bogey-free round of 6-under 65 on Saturday at TPC Scottsdale, and leads the Waste Management Phoenix Open after 54 holes. The 25-year-old from South Korea is at 16-under-par for the tournament, and one-stroke up on Scotland’s Martin Laird, who’s alone in 2nd at -15. The two will be paired together in Sunday’s final round.

A group of four players – John Peterson, Graham DaLaet, Michael Kim and Hideki Matsuayama – are at 12-under and tied for 3rd place.

Brendan Steele, who entered the third round tied for the lead, shot a 1-under 70 and is tied with a group of 5 players at 11-under (T7), including first round leader Matt Kuchar.

Phil Mickelson and Webb Simpson both shot 6-under 65s and moved up 16 spots to T12 at 10-under – six shots behind the leader.

“Had some great shots to get the confidence going, and I have confidence in the driver… A lot of holes, had some carries over the bunker, and when you hit it long, it’s an advantage this week. These greens are pretty firm, and it’s going to get pretty firm, too. It should help.”
–Byeong-Hun An, Leader – Waste Management Phoenix Open