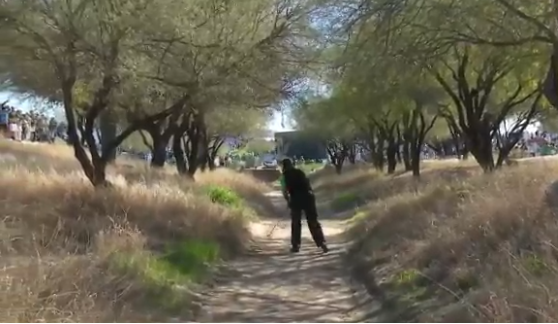 Phil Mickelson is without question one of the most beloved golfers in PGA Tour history. And while his always-smiling persona is partly responsible, the other main reason is his fearless gambler’s mentality – he’s never seemingly out of a hole, no matter where he’s shooting from.

Like for instance in this clip, where Phil, on the par-4 9th hole, shoots from a cart path between TWO THICK ROWS OF TREES.

And makes it out cleanly!

Mickelson would go on to chip it to 6 feet, but, unfortunately, missed the par putt and walked off with a bogey 5 (his only bad number on Saturday).

For the day, the 5-time major champion had a terrific round of 6-under-par is is now 10-under for the tournament – tied for 10th.