Patrick Cantlay and Graeme McDowell share the lead at 7-under par after a shortened second day at the Genesis Open. 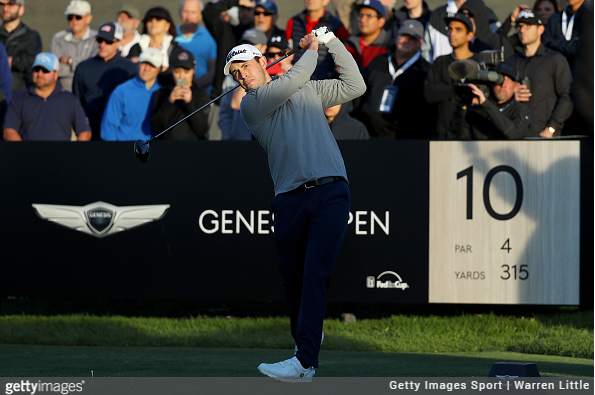 First-day co-leader Cantlay shot a 2-under 69 on Friday which included five birdies against three bogeys.

“I played well today. The wind was switching all over the place for probably the first 12 or so holes I played and it was tricky,” said Cantlay, who hit 15 of 18 greens on Friday.

“I did a lot of good things, everything’s good. Just got to clean up a few things and it would have been a really great one.”

McDowell, who entered Riviera off four-straight MCs, finished his second day in Pacific Palisades with seven birdies against two bogeys en route to a 5-under 66.

“Just kept the ball in play. Ball striking’s been really solid the last two days,” said McDowell, who has hit 75% of his greens and fairways through 36 holes.

“I think when you showed up, you saw some maybe conservative enough play. I was a little bit out of position coming into those last three or four holes, and I think that speaks volumes about what you have to do well on this golf course if you are out of position, you have to take your medicine.

“But if you do hit it well, it offers up a lot of chances.”

Sam Saunders and Ryan Moore were one back at 6-under par, one clear of Tony Finau, who shot even-par 71 and sits solo-fifth at 5 under.

Bubba Watson was at 7 under with five holes to play, but the World No. 117 seemed to lose focus down the stretch, finishing double bogey-par-par-bogey-par, good for a 70 and a two-day total of 4-under par.

Defending champion Dustin Johnson shot 2-under 69 and sits T52 at 1-over par. Tiger Woods (76) finished his 36 holes at 6 over and missed the cut.

“Yeah, it’s nice. I feel really comfortable on this golf course and it’s always nice to be in California, I feel right at home. I’m looking forward to the weekend.”
– Patrick Cantlay