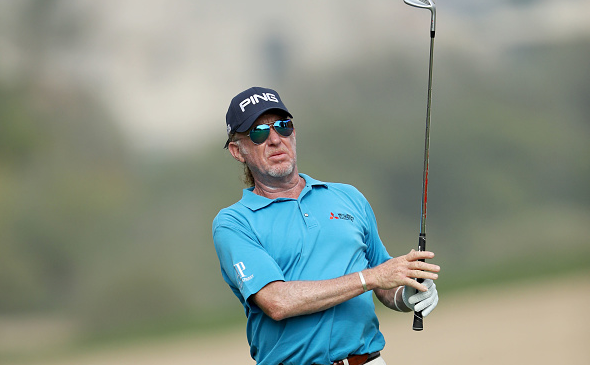 Miguel Angel Jimenez opened with an 8-under 64 and will take a one-shot lead into Saturday’s second round of the Chubb Classic. 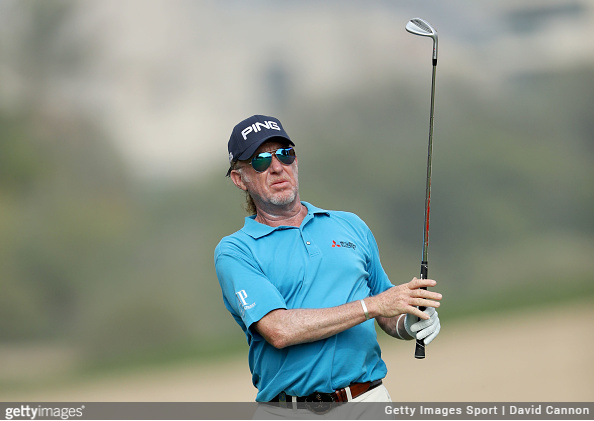 Jimenez finished his first day at TwinEagles with an eagle and seven birdies against just one bogey.

“It’s a nice golf course, where you play all the course from the back, and I feel good here.”

Gary Hallberg and David Frost sit T2 at 7 under.

Making his season debut on a sponsor’s exemption, Hallberg offset bogeys on Nos. 1 and 10 with nine birdies, including a hat trick on the final three holes.

“I felt good. Yeah, it was a super day, guys. Nine birdies and two bogeys on a pretty good day, tough day,” said Hallberg, whose claim to fame is being paired with a 16-year old Tiger Woods in his PGA Tour debut at Rivieria in 1992.

Frost reached 65 by the way of two bogeys, six birdies and one eagle – aided by a new putter from Kenny Knox.

“I called Kenny [Knox] on Monday night, and I said, “Kenny, I need one of those putters, man.” So he overnighted one to me, and I got it on Thursday morning. I paid for it, and I putted with it today, putted beautifully,” said an excited Frost.

“Thanks to Kenny I rolled the ball beautifully.”

One further back at 6 under is group of five players, including Glen Day, Lee Janzen, Scott McCarron, Jesper Parnevik, and Kevin Sutherland.

“We don’t have cuts to make, we can freewheel it from the first hole, and that does make a difference, you know. Coming out here and freewheeling it, because you have nothing to lose.”
– David Frost