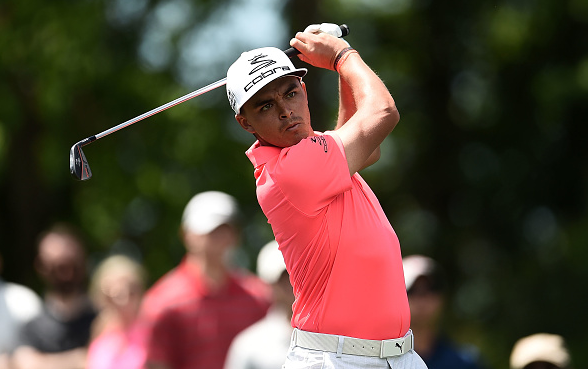 Most of the world might already be in Masters mode, with the most popular tournament of the year teeing off in one week, but in Houston, an entertaining battle is underway at the Shell Houston Open.

Rickie Fowler, one of the players facing the most pressure to break through with a win at a major, looked in championship form in round 1, posting an impressive bogey-free eight-under 64 to take the Shell Houston lead.

With a flurry of back nine birdies (his front nine), Fowler holds a one-stroke advantage on South Korea’s Sung Kang, and is two strokes ahead of the trio of Stewart Cink, Jhonattan Vegas, and Kyle Stanley.

How Fowler Did It

His eight birdies tied for the field lead, and Fowler was deadly accurate in his first round, hitting 12 of 14 fairways and 16 of 18 greens in regulation.

Stewart Cink has been quietly good this season, missing just two cuts in 12 events and finishing in the top 30 in eight of them.

Like Fowler, Cink did most of his damage on the first half of the back nine, with birdies on 4 of 6 on the back, which catalyzed a bogey-free six-under 66. He is currently tied for third place.

Vaughn Taylor has not done much since his surprise win at the 2016 Pebble Beach Pro-Am, but a back-nine tear led to a first round five-under 67 in Houston. Tied for sixth place after one round, Taylor has not finished better than T23 in any of the 11 events he has played this season.

Andrew Loupe has missed the cut in all 7 events he has entered in 2017, but looks to be reversing that trend with a four-under 68 in the first round. The long-hitting Loupe was phenomenal on the greens, picking up nearly four spots on the field with the flat stick.

That is very encouraging for a man who ranks a dismal 208th on Tour in strokes gained: putting.

Aside from his front nine against Dustin Johnson, Jon Rahm looked unbeatable at last week’s WGC-Match Play. He had considerable momentum coming into the week, but wasn’t able to do much with it today, going +1 on a back nine that the leaders were tearing up, and posting just one-under 71 today.

Phil Mickelson, who exuded dominance in match play last week was a stroke worse than Rahm, cancelling out his three birdies with three bogeys, and is now eight strokes back after a round of even-par 72.

The game of Patrick Reed has been in absolute shambles as of late, and sadly for him, that trend continued in round one. A nightmare front nine, which included three bogeys and a triple, was to blame for a very disappointing five-over 77.

Only four players in the 144 man field were worse in the opening round. Strangely, the poor round came in spite of Reed missing just three fairways and four greens in regulation.

Presumably for Masters prep, the Shell Houston field contains a fairly large number of European players who do not play a lot in the U.S. for non-majors or WGC events.

For the most part, they are struggling. Lee Westwood was the worst of them, starting his round double-bogey, bogey, double-bogey and ended up posting a five-over 77. Rafa Cabrera-Bello is among the top half-dozen most talented players in the field, but is not showing that today, finishing +3.

Chris Wood finished +1, which tied him with Andrew “Beef” Johnston, who bogeyed three of his last five holes to finish at that number.

Henrik Stenson, the highest ranked player in the field, had a surprisingly poor round as well, finishing +2 despite birdies on two of his last three holes. Stenson’s putting was a nightmare in round one, and at -2.436, only ten of 143 players finished worse than him in strokes gained: putting.

On the other side of that coin, Justin Rose had a fantastic day, birdieing five consecutive holes at one point and posting a five-under 67. England’s Andy Sullivan (-4) was also in form today, a promising sign after an atrocious showing last week at the WGC-Match Play.

“My year hasn’t been THAT bad, but it’s nice to get a low one. 64 is always a great number, but I did a great job out there, just kind of managing my way around; everyone had to play with mud balls this morning, and I assume it will be the same this afternoon. I took advantage of the par-3s, when we got some clean golf balls. I played those three-under so those were huge on adding to it being a low round.”
–Rickie Fowler, first round leader