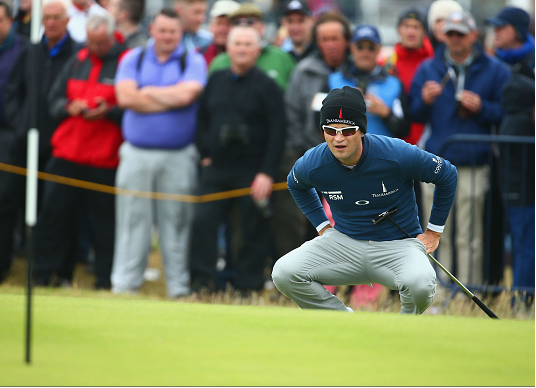 The Open came down to a battle between Phil Mickelson and Henrik Stenson, where they tore Royal Troon apart and traded punches with each other. Stenson’s knockout punch came on the 15th hole, where he drained an improbable 51-foot putt to take a two shot lead, which turned into a three shot victory with a birdie on 18.

Stenson’s performance may have earned him his first major championship, but that’s not the only thing being talked about.

Rickie Fowler, Jordan Spieth, Justin Thomas, Zach Johnson, Jason Dufner, and Jimmy Walker made headlines this week when they rented out a house together, ultimately dubbing it the ‘frat house’.

The boys had a ton of fun off the course as their backyard baseball antics and movie nights are well documented, but what’s more important is how they performed on the course.

Here’s a look at how each ‘frat’ member finished:

Zach Johnson went into the weekend at 5-under, but shot 4-over for the weekend. At least the defending champ was the house leader.

Dufner was relatively steady all week, and according to the boys in the house, was the best at backyard baseball. So he’s got that going for him.

Spieth barely made the cut at 4-over, but a final round 68 earned him his first round under par at a major since round one at the Masters this year, which he’ll look to use as momentum heading into the PGA Championship at Baltusrol.

Fowler’s struggles at the majors this year continue, as his week was marred by a 76 in the third round.

Thomas made some noise when he shot 67 in his first ever round at the Open but could never find that form again, as he followed up with a 77 and never broke par again.

The ‘frat house’ made the Open that much more fun, and hopefully they all get together again in New Jersey a little over a week from now for the PGA Championship.