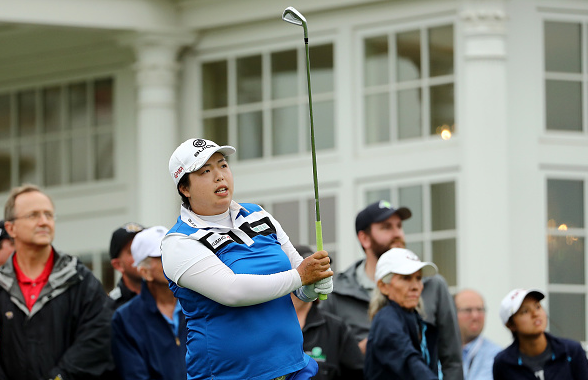 Shanshan Feng posted a 2-under-par 70 on Friday at Trump National Golf Club, and leads the U.S. Women’s Open by two shots after 36 holes.

The 27-year-old Chinese star is at 8-under 136, following a round which included three birdies and one bogey.

Seon Woo Bae is alone in fifth place at 5-under after a 69.

Brittany Lincicome, who made news by calling for President Trump to stay away from his own course, won’t have to worry about sharing the spotlight with the 45th POTUS. She missed the cut. Also missing the cut: Danielle Kang, who won the KPMG Women’s PGA two weeks ago, and World No. 2 Ariya Jutanugarn.

Speaking of Trump, he was cheered by both players and fans alike when he was spotted at the ‘president’s box’ next to the 14th green. According to reports, he “played to the crowd, waving at the fans, giving them thumbs-up and pumping his fist.”

“I played probably the first nine holes in the rain, but my phone told me it was going to rain all afternoon and I was prepared. I really didn’t pay attention to the weather and just concentrated on every shot. But I had a lot of 5-irons and hybrids into par-4s and a 3-wood on No. 9.”
–Shanshan Feng