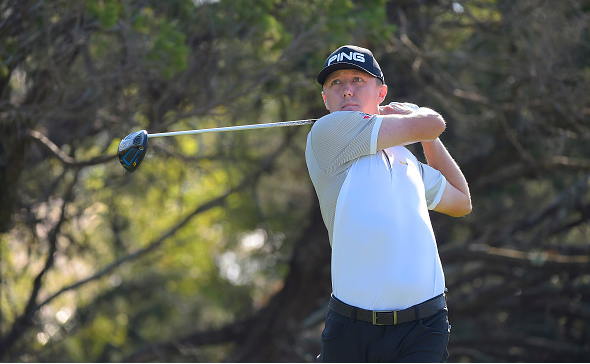 In just his ninth career PGA Tour start, a bona fide unknown, Canada’s Mackenzie Hughes, might have already figured out this whole elite-level golf thing. The recent Web.com Tour grad was flawless in his opening round at The RSM Classic at Georgia’s golf paradise of Sea Island, shooting a nine-under 61 on the par-70 on the Seaside Course.

Hughes leads by one stroke over two golfers who are much, much more experienced: former Open Championship Winner Stewart Cink (518th career PGA event) and Jonathan Byrd (360th career PGA event). Half the field played their first round at Seaside, while the other half played at Sea Island’s other course, the par-72 Plantation course. They will switch for round 2.

Despite playing on the PGA Tour so seldolmly since turning pro in 2013, Mackenzie Hughes looked anything but inexperienced in round 1. Hughes parlayed birdies on 2 and 3 to three other front nine birdies to go out in five-under 35.

He stayed hot on the back nine with birdies on 11, 12, 14, and 15 to get to nine-under after 15 holes. With three holes to go, 59 watch was on for Hughes, but after a par-par-par finish, he was happy to settle for a 61. He was phenomenal off the tees in round 1, hitting all 14 fairways, which was obviously the best in the field.

It was not just his long game that was clicking either, as Hughes finished first in the field in strokes gained: around the green, and ninth in strokes gained: putting. Hughes had been trending the wrong way lately, finishing T13 at the Safeway Open, and then playing worse each week: a T26 at the Sanderson Farms, T68 at the Shriners Open, and a missed cut at the OHL Classic, so this was an important round in getting his game back together.

Hughes, Cink, and Byrd all played the Seaside course today. Among those who played the Plantation course, Cameron Tringale, Kyle Stanley, and Hiroshi Iwata tied for the best score: a seven-under 65.

Tringale got there with birdies on four of his last five holes, Stanley was bogey-free and had pars on the first six holes before getting hot, while Iwata had a front-nine eagle before going out in five-under 31. For Tringale, this great round does not reflect his dismal recent form, but Stanley and Iwata both have a top-10 early in the year, with Stanley finishing T7 at the Shriners Open, and Iwata finishing T5 at the Sanderson Farms Classic.

Carl Pettersson was one of the better golfers on the PGA Tour for years, with five career victories, and many more high finishes. Over the past year and a half, however, Pettersson’s game has been downright abysmal.

In 22 events during the 2015-16 season, the amicable Swede made just five cuts. Today, Pettersson showed signs of coming back to form, with a five-under 67. He had just one bogey on the day, and birdied four of his final six holes.

Kevin Tway has not finished better than T35 in any of his 4 tournaments in the new season, has not had status on the Tour since 2014 (he has played in only six events over the past three seasons), and has never finished inside the top 25 of any tournament, but after a six-under 66, Tway is in a tie for 8th, which puts him in position for his best career PGA finish.

Bill Haas was among the favorites coming into the tournament, but after a one-under 69, he is not even in the top 100. Haas bogeyed his first two holes, and struggled to do much after.

Zach Johnson is one of the three players in the field who were in the Ryder Cup (Brandt Snedeker, and Matt Kuchar are the other two), but he struggled badly in his first round of his new season, not shooting under par on a single hole until the 15th, and finishing an even-par 70.

“I drove it pretty good, I was pretty proud, I stayed aggressive out there today, you know when you get at five or six-under you kinda start to think, hey, let’s just kind of cruise and get in the house, but I stayed aggressive, I hit some really good iron shots today, some mid irons, hit a few shots close, and made a few putts. It was a fun day! My daughter, Caroline, turned 8 today, so shooting 8-under for her is a good birthday present, for me, but she liked it.”
–Jonathan Byrd