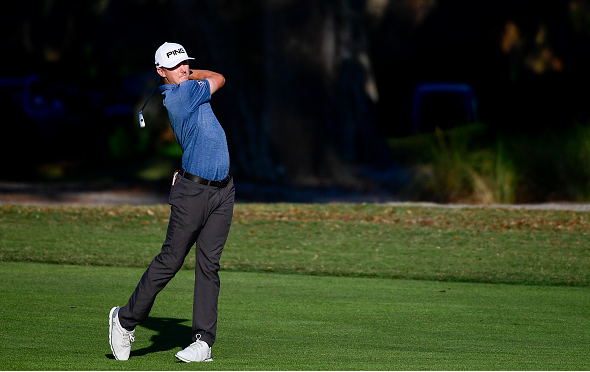 It had to be difficult enough for Mackenzie Hughes to play well with his first 18 hole lead in just his ninth career event, but having to do it on a different course than the one he had so much success on yesterday? Brutal, but Hughes did not just meet the challenge, he managed to extend his lead.

With a five-under 67 at Sea Island’s Plantation Course, one day after a nine-under 61 on the Seaside Course, Hughes is at -14 after 36 holes, which puts him two strokes ahead of Chinese Taipei Olympian Cheng Tsung Pan, and three ahead of Hudson Swafford, Blayne Barber, Chad Campbell, and Chesson Hadley.

With the field having played 18 at both courses now, it becomes easier to compare, and so far, nobody has compared to Mackenzie Hughes.

For the second straight day, Web.com Tour grad Mackenzie Hughes was bogey-free on his round. Playing the Plantation Course today, Hughes was unflappable, with three birdies on his front nine and two on the back.

He is setting the bar very high for himself, especially since he had never made the cut in a PGA Tour event prior to this season, and his all-time best finish is just a T13 at the season-opening Safeway Open.

Since the overall field was not especially strong (it doesn’t help that all the European stars are in Dubai this week), the great names in the field stood out more than usual. Strangely, with just the exception of just a few exceptions, those names are struggling badly in Georgia.

After a solid first-round 66, Brandt Snedeker was very inconsistent in round 2, with four bogeys to just three birdies, finishing with a one-over 72, making the cut on the number. Defending champion Kevin Kisner (-2) missed the cut, along with 2015-16 runner up Kevin Chappell (-4).

Also missing the cut were Zach Johnson (-2) and Matt Kuchar (E), who along with Snedeker, were members of the recent American Ryder Cup Champion team. Ernie Els (-2), Davis Love III (E), and Vijay Singh (+2) are well past their primes, but are also big names that did not finish well.

One big name that disappointed yesterday was Bill Haas, who shot a pedestrian one-under 69 at Seaside yesterday, did much better on Plantation, and with birdies on five of his final six holes, he carded a six-under 66.

Haas rose nearly 70 spots in the standings, and is now just seven strokes back going into the weekend. Moving up even further was Mark Hubbard who jumped 84 spots with his seven-under 65 on the Plantation Course. Hubbard was bogey-free.

Johnson Wagner was in great position after round 1, being part of the enormous logjam that was tied for eighth place. Today, he plummeted 90 spots and missed the cut entirely after shooting a three-over 73 on Seaside.

Also missing the cut after a tremendous first round was 2015-16 RSM runner-up Kevin Chappell, who followed up a first round 64 with a second round four-over 74 at Seaside. Stewart Cink, who was in a tie for second place after a round one 62, played well enough to get in front of the cut line, but with a disappointing one-under 71, Cink fell five strokes out of the lead.

“It wasn’t quite like the day I had yesterday, but I was still keeping the ball in front of me, I hit a good number of fairways, and kept the damage off the scorecard.”
– Mackenzie Hughes, second round leader