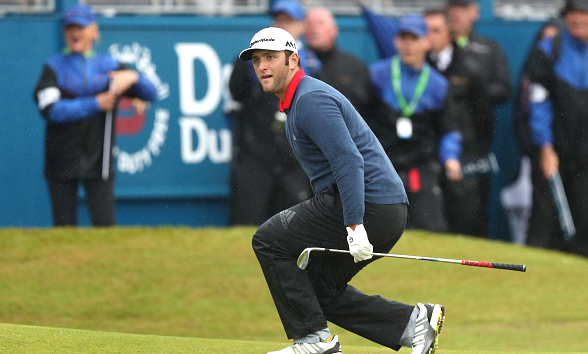 Jon Rahm’s play in his 13 months as a professional has been nothing short of incredible. In that time, the 22-year-old Rahm has risen from outside the top 500 in the official world golf rankings to the No. 8 spot, and is likely to keep an upward trajectory.

On the PGA Tour, he has a victory and six top 5 finishes and has cemented his status as one of the top young players in the game.

However, Rahm has been a source of controversy as of late, having difficulty controlling his temper during a surprising two-week skid where he missed the cut at both The Memorial and the U.S. Open.

Over the weekend, he played in his just his second European Tour event, the DDF Irish Open, and absolutely obliterated the field, shooting a final-round 65 and cruising to a six-stroke victory.

While a lot of the talk has been about his incredible performance, the win has been somewhat overshadowed by professional golf’s latest rules controversy.

On the sixth green, Rahm appeared to have unintentionally placed his ball a considerable distance from his ball marker. Rules officials determined that Rahm had not committed a violation. But that has not stopped his win from being criticized.

“So do I think he’s got the ball in exactly the right place? No, I don’t. I think the ball is slightly in the wrong place, but we’re talking about maybe a couple millimeters here or there. So then that falls within the limitation of video evidence, and it comes down to has the player made a reasonable judgment? And I believe he has.”
–Andy McFee, Rules Official