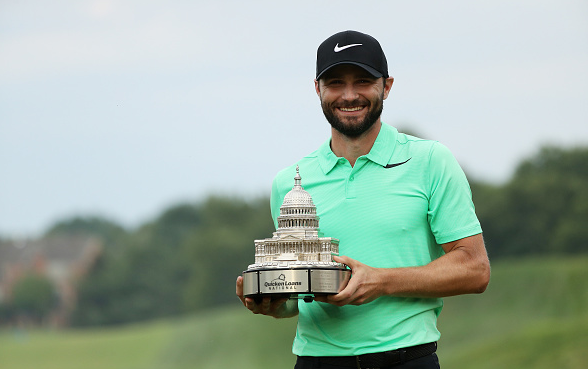 And while the gritty championship effort of Tom Coughlin’s New York Giants got top billing, it may not have even been the most inspiring athletic accomplishment of the day.

Approximately twenty-five hours from the Super Bowl host city, Indianapolis, Indiana, a young PGA Tour golfer named Kyle Stanley unfathomably overcame an eight-shot final round deficit to win the Waste Management Phoenix Open, just one week after having blown a six-stroke final round lead of his own.

That win, the first of Stanley’s professional career, was one that many thought would lead the then-24 year old to PGA Tour stardom.

Unfortunately for Stanley, his career has been a prodigious struggle. Since that win in 2012, right through early 2017, Stanley went winless with just three top-10s total – all of which were in a five-week spurt in 2013.

However, the man who completed an unbelievable comeback in Phoenix, has risen like one this season, netting high finishes in several big events (T4 at THE PLAYERS, T6 at The Memorial), and now, after a final round 66 at TPC Potomac, Stanley is again a champion.

With a par on the first playoff hole, Stanley defeated Charles Howell III, to capture the 2017 Quicken Loans National.

How Stanley Did It

Stanley started his final round a little bit off the radar, lurking in seventh place, four strokes behind 54-hole leader David Lingmerth.

After Lingmerth bogeyed holes #1 and #5, it suddenly became a free-for-all with nearly a dozen players sitting within a stroke or two of the lead.

Among those near-leaders was world No. 9 Rickie Fowler, who went on a birdie barrage, with a career-high nine on the day, all coming after the fifth hole, and Curtis Luck, a talented rookie who was in contention for the first time as a professional.

Stanley, meanwhile, also made his move, with birdies on 5, 6, and 8 to jump into the mix. He stayed hot on the back nine, with two birdies and seven pars to finish the day with a 4-under 66, and 7-under for the tournament.

Stanley’s closest competitor ended up being Augusta resident Charles Howell III, who was looking for his first win since 2007. After narrowly missing a birdie putt that would have won it, Howell III went to the clubhouse at -7, meaning a two-man playoff.

On the first playoff hole, despite a poor drive that went well right of the fairway, Stanley was able to leave himself with a five-foot par putt. After Howell III missed a par putt of his own, Stanley calmly sunk his, claiming his second career Tour title.

Stanley was dialed in all weekend, missing just four fairways and four greens over his last 36 holes. He led the field for the week in shots gained: off-the-tee.

What It Means For Stanley

The Quicken Loans Nationals victory adds further validation to a tremendous comeback season from the now 29-year-old Stanley. He has not qualified for a major since 2013, but will now be in the field for this month’s Open Championship at Royal Birkdale.

It was the fifth top-10 on the year for Stanley, one more than he had in his previous four seasons combined. He should be considered among the favorites for comeback player of the year.

Rickie Fowler was undeniably the most popular man in the field this week, and he dazzled spectators on Sunday, carding a career-high nine birdies en route to a final round 65.

Starting the day in a tie for 18th, Fowler briefly had a share of the lead after six birdies in a seven-hole span, but immediately gave two strokes back to the field with a double-bogey six on the par-4 14th hole.

He played his final four holes two-under to post the second-lowest round of the day, finishing in a tie for third place.

The low-round of the day came from a surprising place: Nick Watney.

Watney has been largely irrelevant the past four years, but had an extremely encouraging finish at TPC Potomac, shooting a 6-under 64, getting him to -3 for the tournament and a share of 13th place.

Fowler’s 65 was matched by just one player, Ben Martin, who netted his best finish of the year by far, a tie for fifth.

Limping To The Line

David Lingmerth threatened to run away with the tournament after opening with a pair of five-under 65s. He stayed in the lead through three rounds, despite a Saturday 73, but his Sunday was much more like his Saturday than his Thursday or Friday.

Lingmerth was 2-over through five, and never re-established himself, finishing with another 3-over 73, a tie for fifth.

Further adding to his disappointing, he missed a birdie putt on 18 that would have clinched a spot in this month’s Open Championship.

Lingmerth’s Sunday playing partner, Daniel Summerhays, was even worse, carding five bogeys and two doubles on his way to a 4-over 74 and a tie for 17th. It was the second time in a month that Summerhays struggled on Sunday after getting into the final pairing, finishing T10 at The Memorial after a final round 78.
He was even worse on Sunday at the U.S. Open just a few weeks ago, shooting a final round 81 at Erin Hills.

Summerhays is getting into contention more this season, which is encouraging, but he needs to find a way to hold himself together on Sundays.

The big faller of the day was the long-hitting Andrew Loupe, who had six different results over his final six holes, going par, eagle, bogey, double-bogey, birdie, triple-bogey in that stretch, leading to a four-over 74 that dropped him 26 spots down the leaderboard.

Claiming Spots at The Open Championship

Four spots for this month’s Open Championship at Royal Birkdale were up for grabs at Potomac, a big deal in a field that was short on players who had already qualified.

The exemptions were granted to the top four finishers who were not already in the Open field. Stanley, Howell III, and Martin Laird took the first three.

The fourth became a tie between seven players who had finished T5 at 4-under. With highest world ranking being the tiebreaker, that last spot ended up going to South Korea’s Sung Kang. For everyone else, next week’s Greenbrier Classic marks the last chance to get into the Open field.

“It’s confirmation we’ve been working on the right things, if anything it’ll probably make me hungrier to get back to work. I’m happy for a lot of people, I’ve had a lot of help, it means a lot to me and my team.”
–Kyle Stanley, Quicken Loans National Champion