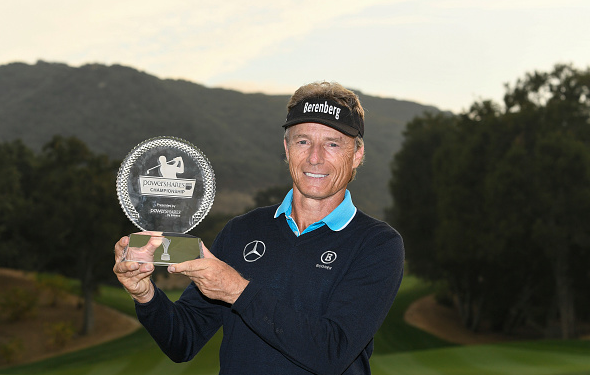 Bernhard Langer fired a final-round 5-under 67 and beat Miguel Jimenez on the second playoff hole to win the Powershares QQQ Championship, the second leg of the senior tour’s playoffs. 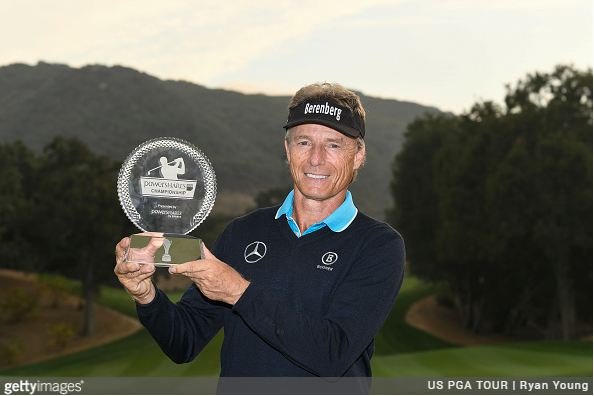 Langer, who started the final round tied for the lead with Jimenez and David Toms, had fallen back early and was just even-par through seven holes. But a chip in for birdie on No. 8 sent Langer on five-birdie stretch over seven holes to get to 11 under, and the tournament lead.

“That was phenomenal. It wasn’t an ordinary chip. I had to aim about 15 feet left and go up a hill and down a hill and it just was perfect, so that was exciting,” said Langer.

Jimenez, meanwhile, was two down with three to play, before a chip in for eagle on the par-5 16th got him to 11 under and a share of the lead.

“On 16 I hit a beautiful driver, I hit my 7-wood, nearly make 2, and I had five meters to the hole and I used my little 52 wedge,” explained Jimenez.

The co-leaders parred the final two holes to set up a sudden death playoff, where Langer, on the second OT hole, won in dramatic fashion by draining a long bomb downhill birdie putt.

Afterwards, Jimenez cited Langer’s performance on the greens as the difference-maker.

Langer has now won both playoff tournaments and heads into the Charles Schwab Cup Championship as the No. 1 seed. But with a reset of points, any of the top 5 can capture the title with a win in Phoenix.

“I do feel great about my game, but there’s so many good golfers on this tour and we’re going to have the best 36 there at the Schwab Cup,” said Langer. “It’s a different golf course, different grasses, all that kind of stuff, so anything can happen. I mean, today I don’t know what happened to David Toms, but he was right up there and then he must have messed up somewhere.”

Toms (69) knocked himself out of contention with a double bogey on 15 followed by a bogey on 17. The 50-year old closed with a birdie on 18 to get to 9 under and solo third.

“Yeah, well, on any given week any of those 36 can win, so it’s a new tournament all over again.”
–Bernhard Langer, 2017 Powershares QQQ Championship winner