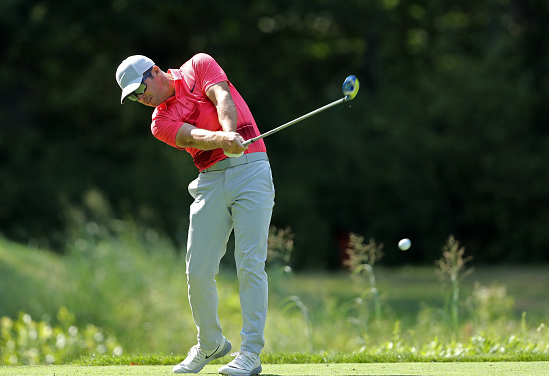 English golfer Paul Casey shot his third consecutive 5-under 66 at TPC Boston on Sunday, and heads into the final round of the Deutsche Bank Championship three clear of the field.

Casey’s third round finished nearly as well as a round could, as his second shot into the par-5 18th missed the hole by mere inches, leaving him with a tap in eagle.

The Englishman will enter the final round with a three shot lead over Brian Harman, and four clear of the American trio of Smylie Kaufman, PGA Champion Jimmy Walker, and second round leader Kevin Chappell.

The PGA Tour is preparing for potentially very poor weather for Monday’s finishing round at TPC Boston due to tropical storm Hermine.

Tee times have been moved way up, and the golfers will go out in threes off two tees. They’re planning on getting the entire field off between 7-9:00 AM. This may give Casey an advantage since growing up in England, he likely has the most inclement-weather experience of anyone in or around the lead.

Casey came into the tournament ranked 59th in the FedEx Cup standings and looks likely to move way up. With the Top 70 moving on to round three, the BMW Championship at Crooked Stick in Carmel, Indiana, he is safe for next week. But a win, or even a Top 5 finish, would punch his ticket to East Lake and the Tour Championship.

Casey is having a good year on Tour, and has consistently been showing up for the larger events, as evidence by a T4 at The Masters and a T10 at the PGA Championship.

Louis Oosthuizen made the biggest move today, with a third round seven-under 64. Oosthuizen birdied 2, 3, 4, and 5, and played the back nine at 3-under. He was bogey-free today, and his 64 ties for the tournament low.

For the second straight day, Rory McIlroy was in great form, shooting a five-under 67, despite a double bogey on 12. Like Casey, McIlroy eagled the 18th. Both McIlroy and Oosthuizen are at -9 for the tournament, six strokes behind Casey.

James Hahn continued his up-and-down week with a bogey free round of five-under 67. Hahn was the first round co-leader after an opening 65, but a dismal round 2 74 knocked him out of contention. He is now at -8, seven strokes out of the lead.

Falling Back
Defending FedEx Cup champion Jordan Spieth had a tough go of things today, bogeying the first three holes and finishing at +1. Sergio Garcia matched Spieth’s 72, and now both are at 5-under for the tournament.

Dustin Johnson had a brutal round, carding only one birdie on his way to a four-over 76. Johnson was in contention until a double bogey on the 18th hole of round two. Jim Furyk was +2 on his day, not a good result for someone hoping to be a Ryder Cup Captain’s pick. Projected 80th in the standings, Furyk is also in danger of being eliminated from the FedEx Cup Playoffs.

FedEx Cup Positioning
Six players are projected to jump into the Top 70, which is the cutoff for next week’s BMW Championship. The biggest move has come from Steve Stricker, who started the day 97th, but is currently projected 68th. He will need at least a decent Monday round.

“There’s a reason I live in Arizona: to avoid that kind of stuff. I used to do it very well when I was in Europe. I don’t necessarily like it, but I can deal with it, and I feel like I’ve got the right attitude so it’s the same for everybody. I think the difficulty comes when it rains a lot and the ball gets slippery on the face with everybody, but it is what it is.”
–Paul Casey, talking about potentially hazardous weather conditions for the final round.