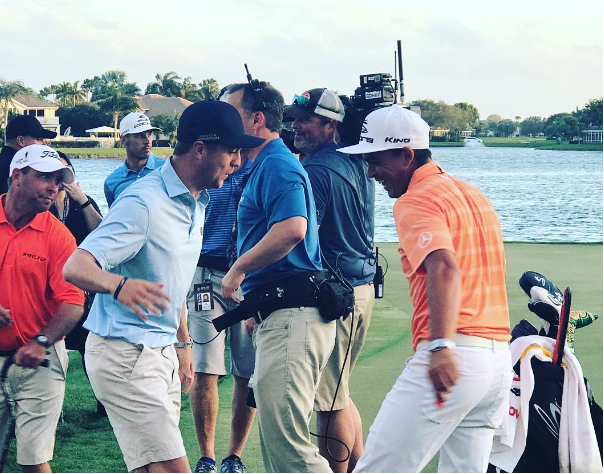 Heading into the long-running tournament at PGA National last week, there were questions (cough, cough) if Rickie Fowler was considered elite anymore, and if he even belonged in the conversation when talking about the young stars of the game.

Well that talking point, and narrative, was blown out of the Florida skies.

Fowler won his 4th PGA Tour title at The Honda Classic, and in rather convincing fashion. Along with a decent looking glass trophy, Fowler took home a check for over $1M.

So what does one of “the young stars of the game” do after making the golf media look like fools? He celebrates, of course.

First some slaps with buddy Justin Thomas (who knows a little something about winning) green-side.

Something I love about our sport.. anytime you can watch one of your boys win, you do!! Pumped for @rickiefowler, was cool being there for the last putt. Lets see how many wins we can get this season in the #sb2k16 crew!! #5andcounting #boomtower

Then a little glass of champagne while answering some questions from the fake news media – all with another classic Rickie face.
https://www.instagram.com/p/BRAHRtpD55L/

Rickie then amps it up with some champagne spraying among friends and (what appears to be) some of Florida’s finest. (Note: Love the guy just walking around with the cardboard check.)

This party's just getting started. ? pic.twitter.com/iSpiUXreKi

Finally, Rickie takes in some late night enjoyment with friends at a watering hole where he gets to watch himself on replay – and make videos for social media.